While searching through a large shoe box full of old photos, looking for something planned for a future post I found lots that I'd love to share. So I will just because I can! 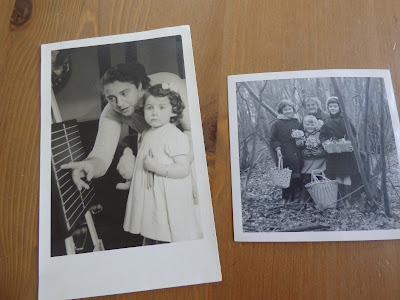 What's my mum trying to show me on my new blackboard in this carefully posed photo? Xmas 1957 or 58 it says on the back written in much later. Probably 58 I think

On the right - this was a regular thing every spring, our next door neighbour Mrs A would take us for a walk "up the fields to the woods" where we probably wiped out all the primroses, cowslips and oxslips, bringing them home by the basket-full. Mrs A is seated on a tree-stump, with her grand-daughter Penny on her knee. I'm on the right - school gaberdine coat and welly boots! (What WERE gaberdines?) and on the right is Margaret the grand-daughter of the people who lived the other side of Mrs A.  There were very few children in our street so visiting grand-children were roped in whenever possible to keep us company. This would have been taken in about 1962 or 3.

Honeymoon accommodation September 1979! . A tent and camping equipment borrowed from the Scout group where we were both leaders, on a slightly tatty campsite just inland from Sandown on the Isle of Wight. I was thin then! 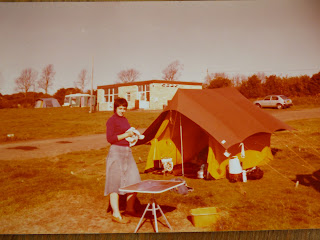 The campsite has since been modernised and is now owned by The Camping and Caravanning Club. 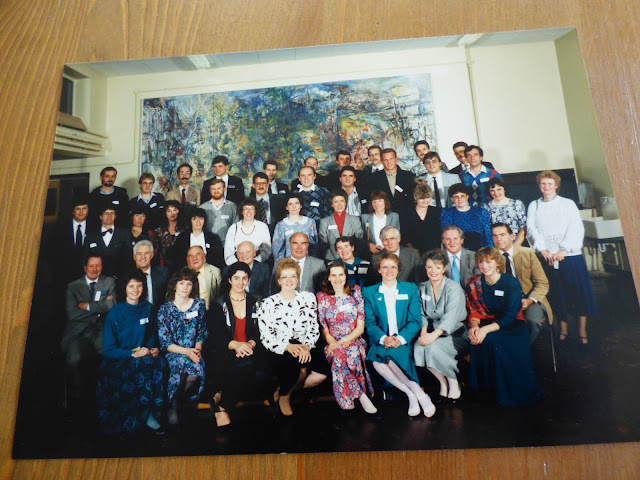 The above photo is of our School reunion held at the school in October 1988. All of us here began at Stowmarket Grammar School in September 1966 and left in 1971 or 1973. Three of us (Front row second left P., third left me and 4th left G)., got together to organise this. Of course this was before social media and the only way to find people was if they or their parents were still in the area and saw the newspaper article or we found their parents in the phone book.

We managed to trace about two-thirds of the 80ish who started in 1966. Lots were overseas and unable to come, one or two "Never wanted to cross the thresh-hold of that place ever again!" and several we couldn't find but those who did come had a good if somewhat surreal evening.  The headmaster - Dr Robert Montgomery and some of the other teachers from that time are seated in the second row. "Monty" as he was obviously called was still headmaster at the time of this photo in 1988 and helped us contact some of the staff.

I could name many of those in the photo but  probably not really correct to do that (although I must mention Charles the guy with the fantastic moustache - he was in the RAF - obviously! and Roderick - known as Roux because of the ginger hair who was at the same primary school as me - last heard of living and working in Sweden). I later became distantly connected through marriage to the lady sitting front right as she is Col's sister's husband's cousin! (Wonder if I have all the apostrophes in the right places? I never could get the hang of them in the first year at Grammar school!)

Now of course everyone seems to keep in touch with everyone else long after school but back in the 70's once you left and went separate ways you were unlikely to ever meet again.Especially if you were at a Grammar school which took children who passed their 11 Plus test from a very wide area.

Our school reunion was the first ever at the school but once the photo above appeared in the local paper I believe several more from other school years were held.

I had a passing fancy (but was busy with a smallholding at the time) to organise another re-union in 2006 - 40 years after starting at the school as our School song was verses 1 and 4 of  "40 Years on". Much more famously known as THE HARROW SCHOOL SONG. Someone obviously had illusions of grandeur when they made this the school song of the much less well known Stowmarket Grammar School!

Back in a trice
Sue

Posted by Sue in Suffolk at 06:30
Email ThisBlogThis!Share to TwitterShare to FacebookShare to Pinterest
Labels: Family, Memories