Someone (reputedly George II in the 1730's) once said that an English summer was 3 sunny days and a thunderstorm. Our storm was at 11am yesterday morning. One flash of lightening, a few rumbles of thunder and a 3 minute shower, our 8 water butts are almost empty so we could have done with a bit more. Colin worked out that it only costs pence to fill a water butt with mains water so that's what we will have to do otherwise I'll lose all my greenhouse crops which would be a loss of pounds rather than pence.

We've now been eating our own new potatoes for a couple of  weeks. Like everything else in the garden they've suffered from dry weather and ants and also being grown on land that was previously grass - at least it had been for a few years. 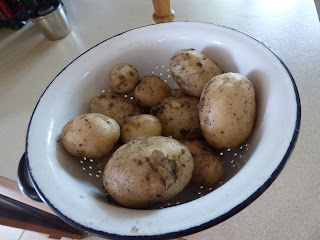 But with a bit of scraping and removing nasty bits they are quite edible. We certainly won't be self-sufficient in potatoes like we were in smallholding days as we only had room for 10 of each first and second earlies. These are Foremost, the first earlies. Taste-wise they certainly beat some new potatoes I bought a while back which had no flavour at all.
We've also had our first courgettes and two small bowls of raspberries from the canes that were here before us, plus I have cucumber overload! I sowed four seeds as sometimes they can be difficult to get going, all four grew then I couldn't bring myself to throw out the two plants I didn't need!

Thank you for all the comments on the last two posts. The years flew by so quickly it's good to look back sometimes to remember all we did.

Back in a flash
Sue

Posted by Sue in Suffolk at 06:00
Email ThisBlogThis!Share to TwitterShare to FacebookShare to Pinterest
Labels: Growing Food, Potatoes