and Bigger spend at the bigger car boot!


I found this photo on the camera from the nearest  car boot sale of several weeks ago, when the weather wasn't too good and there were not many there. 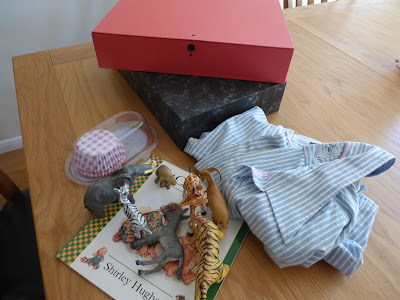 My small spend was a total of £2.60 on these useful things. 2 box files (20p each!), 100 muffin cases, 7 zoo animals, "Chatterbox" a Shirley Hughes book that was new to me and a Jack Wills shirt  for Col. He needs a few long sleeved shirts as he's supposed to keep covered from the sun due to the chemo tablets. Before cancer he preferred short sleeves so only had one or two thin cotton long sleeved.
I said "look what I found for you............a Jack Wills shirt for 50p." . "Who?" he asked. " Jack Wills" I said, "They must be posh because they've got a shop in Aldeburgh!" " Looks like an ordinary shirt to me" he said! Totally unimpressed by the brand...............Thank Heavens.

We had to go out last Saturday to visit someone so called in at the Big boot sale on the way.

Col is feeling well at the moment so he walked round too and found 7 HUGE plastic flower pots which will be useful, the biggest is nearly 2 foot across. He paid £10 for the lot. The way the grapevine is growing in the conservatory we'll be needing that big pot quite soon.

I found this lot below and spent £5 on the chair - a bedroom chair for my bedroom. £2.50 on crafting bits which included loads of C6 envelopes, cards and inserts - with words - and some Christmas bits. The storage container and oven gloves came from the same stall for 75p each and I couldn't resist the  30 dolly pegs for £1. Then I saw some pink reins which I got for youngest and Florence. I'm not sure if young mums use reins nowadays but they were only £1 and might be handy especially as she will also have the dog when Florence wants to walk. 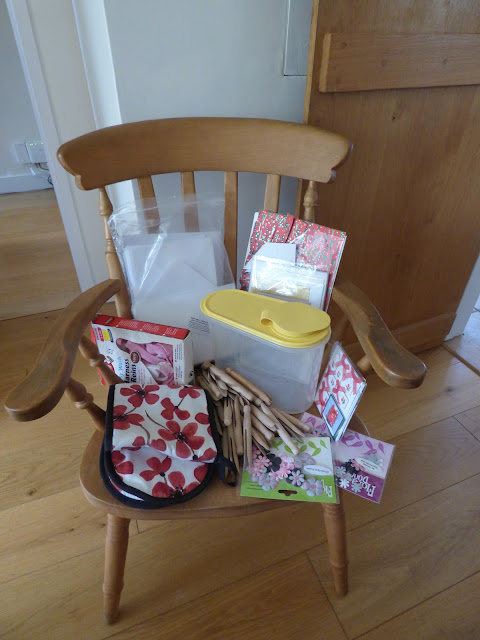 The craft bits have been sorted and put away and hopefully I'll get a chance to do some more card making soon. I've been cross stitching while watching the tennis so have a couple of little pictures to iron and  fit into card blanks.

Re the tennis, when the top seeds at the Queens club tournament were knocked out early I thought it would be one of the younger players who would win but in the end it was a brilliant final by two men who've been around for ages. Now I'm looking forward to July 3rd when Wimbledon starts although for the first time ever (as far as I know) the qualifiers will be on the BBC Red Button next week. Have you seen the trail for the Championships between other programmes on the Beeb, where a tennis ball bounces around the country causing chaos - all computer generated but very clever - I'm easily entertained!

Thank you for lots of comments on Saturdays post.

Back Soon
Sue
Posted by Sue in Suffolk at 06:00
Email ThisBlogThis!Share to TwitterShare to FacebookShare to Pinterest
Labels: Car Boot Bargains