Right back at the beginning of my old Blog I wrote about how we came to be living on a 5 acre smallholding.
Lots of people who read this blog weren't reading then so I thought it worth repeating and updating to tell how and why we are now living in a cottage on an acre, and while I was doing that I decided to add some photos of our biggest house refurbishment.
Photos and Italics have been added to the original post.
C is Colin obviously!

It all started back in 1978 when, for £8,000,  I bought a tiny 2 bed Victorian end terraced house in Stowmarket in Suffolk using a £2000 mortgage and half the house money I got after a very short marriage and a quick divorce.  The house had no bathroom, just a shower which had been chopped off one of the small bedrooms. The kitchen and toilet had been built onto the back of the house and were a bit tatty. What the house did have was a long narrow vegetable garden and some gooseberry bushes and a rhubarb plant. That was when I started growing stuff and making jam, and luckily it was only a short cycle ride to the library where I was working.
When C and I got married he moved in and used a moped to get to work where he was  a council road man. They did things like sweeping paths and clearing out drainage channels at the edge of the road. The pay wasn't much and my pay as a library assistant was also a long way down the County Council pay-scale too. We had gas connected to the house as it was already along the road outside and tidied up the kitchen.
Then I had our eldest daughter, so we were down to one small pay cheque, we grew more vegetables and I learned how to make jam and chutney and we bought everything secondhand.
Once I stopped work it made more sense to move to the village where the council depot was, so C could bike to work. We were very lucky because house prices were beginning to shoot up and we sold it to a single bloke who wanted to get on the housing ladder for £14,000. That's how mad the housing market was, almost double in 2 and a bit years!
We found a modern 3 bed end terrace that was going cheap because it Stank! The lady bred cats and cooked up fish and liver all the time, the neighbours had complained and the worst of it was she was a health visitor! It was £16,000 so we had to have a bigger mortgage but mortgages were easy to get then.
We also had to have a bridging loan to give us time to strip all the wood from the house and re paint everywhere. C and my dad did all the work and Dad helped by putting in a Parkray fire with a back boiler and a couple of radiators as there was no heating in the house apart from an open fire. We had an allotment and then two because by then we had worked out the only way to manage was to grow all our own stuff. I used to keep a strict check on what electric we used, we stocked up on coal in the summer when it was cheap, bought things secondhand and took care to economise wherever we could. Cloth nappies come to mind and walking everywhere in the village.
C worked overtime in the summer doing road resurfacing and in the winter on the gritter lorries. During this time he had changed to a being a Ganger, which meant being in charge of a three man gang and driving the lorry which gave us a few extra pounds a week.
Our next move was 3 years later, just 2 miles to the next village, by which time we had a son too. We sold the house for £20,000 and everyone thought we were mad as we took two children under 4 to live in a caravan while we did up a house. 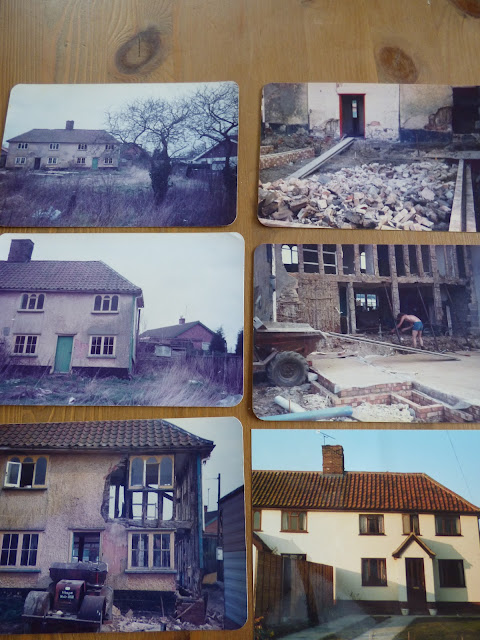 Colin would get home from work and after a meal would be working on the house 'til 9 each night. These 6 photos show what we bought and a bit of the work involved. What we didn't get a photo of at the time was the whole place as a skeleton, because the tiles were off too for a while. The house was semi detached and the other half was being renovated at the same time by a young couple. On the bottom left photo you can just see a corner of the caravan we lived in through a very cold winter. No heating in the caravan except a propane gas mobile heater and a convector heater. And no-one caught a cold all year!
Top right and middle right are the back of the house where we built a new extension of kitchen and cloakroom downstairs and bathroom and bedroom upstairs and that skinny young fella is Colin aged around 25! He is as thin as that again now - but not by choice.


The house was so bad that it had been declared unfit for habitation but a council grant of £10,000 was available for anyone restoring it. The thing we liked was that it had quarter acre of land at the front. We paid £10,000 for it and got a mortgage which they paid out a bit at a time as the work was done. C did a lot of the work, and I helped when I could. The house was stripped back to timber beams, we ( and yes I say we as that was one of the jobs I could and did help with every time the children were asleep) had to dig out 2 foot of dirt floor to get the room height and all the walls had to be underpinned. My dad was able to do the extension ( he was a builder) and plumbing for us.
When our daughter started school I would bike the 2 miles there and back with 2 children on the bike because we couldn't afford very much petrol for the car. We started keeping chickens here and selling the eggs to neighbours.
After a year C got a better job in the council as a supervising foreman, looking after all the gangs who looked after the roads. He was now supervising the winter gritting so we had to stay within 8 miles of the council base to be available for emergencies.
By the time our son was 3 and going to playschool  I was biking up or down that 2 mile road 6 times a day ! and also working as a cleaner when the children were at school and playschool. So we decided to move back to the village where the school was. The house sold for £40,000 again doubling in 3 years because house prices were rising so fast.
We found a bungalow with ½ an acre of land in the village for £42,000, so we had to stretch to a bigger mortgage again. Cs pay was still very average and we always had to make do with what we had, no foreign holidays etc. etc. We built a utility room on the side of the bungalow and an extension out the back- again C did most of the work and then I had our youngest daughter. The bungalow was tucked in at the end of a cul-de-sac with several noisy neighbours, it was OK but not where we wanted to stay. When both children were at school before I had our youngest, I did part time work as a school dinner lady also selling herbs and picking fruit for a fruit farm.
But then we had 2 bits of good fortune. One was C got the job of County Council Bridge Inspector, which was based in Ipswich and didn't have to be tied to where we lived in Mid Suffolk (one of the reasons that he got the job was because no-one with engineering qualifications would take it because the pay was too low!) and secondly we realised that the back garden which had a way into it from a small lane could be sold for a building plot. So after 5 years we sold the house for £71,000 moved into a rented place back in the town we had started from and looked for a smallholding. The children were 11, 9 and 4 by then and for 6 months I home educated rather than change schools twice.
We soon found the smallholding owned by a mad woman and an alcoholic! It was a tip! and cost us £85,000 in 1992, We had to have a bigger mortgage again but thought we could manage it.

So that's how in May 1992 we came to own 5 acres in Suffolk and a 4 bedroom Chalet bungalow.

SOON
Sue
Posted by Sue in Suffolk at 06:00
Email ThisBlogThis!Share to TwitterShare to FacebookShare to Pinterest
Labels: Our Story