Replies and a Cake Recipe

First of all welcome to new followers and thank you for comments which I will reply to in a second but I need to ask a question...............someone without a blog told me they couldn't comment or follow without giving away lots of information about themselves. Is that correct? because I thought that with an anon comment or following with just a name ( any name will do) means that people clicking on the comment or little shadow picture on the followers button can see nothing much except how long a person has been commenting/following on blogger. Or do they mean that Google have their information?

Anyway here are the replies to a few points raised in comments recently.

We do have a donor for Colin's stem cell transplant, but given that 3 other treatments haven't worked we are concerned about this next step which will involve a long stay in Addenbrookes hospital near Cambridge.

I wish we had an aerial photo from later years at the smallholding as we expanded the campsite and planted hedges and trees all around it. We took down the old asbestos concrete sheds and replaced with new buildings, put up a third poly-tunnel, altered the path to the campsite and built a huge new fruit cage. Some of the fences on the 2nd photo were just made of pallets and when they rotted we took them down and used electric flexi-netting for the chickens which opened up the field to make it easier for hay-making. I don't know if there are still companies that take aerial photos and then knock on your door offering to sell them to you?

We've heard nothing about the new owners of the smallholding except they put up campsite pitch fees, installed CCTV and started selling things at the gate not grown on the holding..........which is something you are not supposed to do! But hey ho that's up to them. Nearest neighbours to the smallholding still haven't met the new owners - 2 years on!

And the cake recipe

Looking for something that would make a pack-up to take to the beach, I found this recipe which I'd not made for ages. 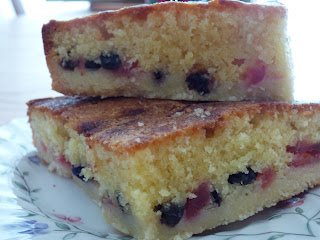 Into a bowl 5oz plain flour, work in 3oz butter and 1oz castor sugar, when mix binds together press into the base of the tin.
Scatter 1oz currants and 12 glace cherries that have been cut into tiny pieces over the base and press down gently.
Cream together 3oz butter and 3 oz castor sugar. Add 1oz ground almonds, 3oz flour, 1 beaten egg and a couple of drops of almond essence and mix all together.
Spread the sponge mixture over the fruit and then bake at Mk 5 (190℃) for about 40 minutes. Turn the heat down or move the tin lower if it starts to look a little too brown.
Leave to cool and cut into slices.

Thanks once again for all the lovely comments.

Back Soon
Sue
Posted by Sue in Suffolk at 06:00
Email ThisBlogThis!Share to TwitterShare to FacebookShare to Pinterest
Labels: Recipes