Good grief, when will I get the chance to read all those when Queens Club and Wimbledon tennis are both on TV in the next month!
Luckily borrowing from the library van means we have 8 weeks to read them and I can probably renew them anyway. 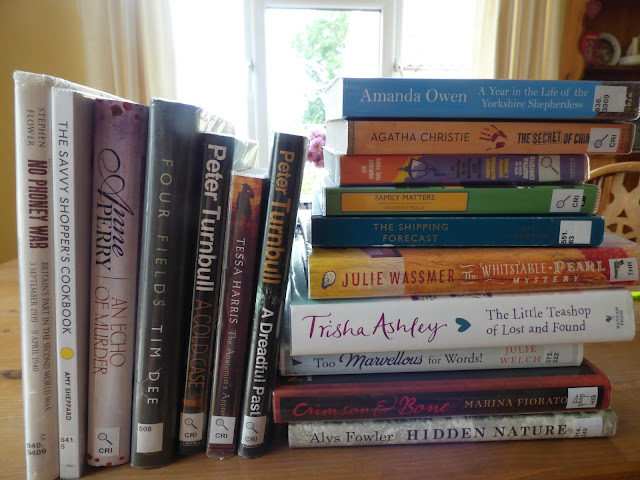 Several of yesterdays haul are books that have been mentioned on blogs or have popped up somewhere as recommended and I've requested them.
So what have we got. From the left.......a book about the first months of the war. Then a cookbook which I've glanced through - looks like some good value recipes. Then the latest in a very long series of historical crime by Anne Perry - always a good read. Next "Four Fields" - saw this mentioned but it may be a bit of a 'dry' read. There are two by Peter Turnbull, who has been churning out crime fiction at the rate of two a year for ever!. Tessa Harris - new to me - no idea what it is.
From the bottom of the pile........ Alys Fowler has done several gardening books but this is an exploration of the Birmingham canals by inflatable kayak! Next Crimson and Bones, read about this somewhere and I thought it was historical crime but maybe just historical, it might be OK.
Too Marvellous for Words by Julie Welch is another book about life in a girls boarding school. Trisha Ashley writes light fluffy books which I read now and again for a change.
The Whitstable Pearl Mystery......no idea about this except it's set in Whitstable! " The Shipping Forecast" There are several books around on this subject and this is the latest - a BBC book . Family Matters is another of the British Library Crime Classic reprints.
Then "Six Against The Yard" Which was originally published in 1932 and is a story written by members of The Detection Club which included Margery Allingham and Dorothy L. Sayers. An Agatha Christie that I've not read before............ The Secret of Chimneys and top of the heap is  "A Year in the Life of the Yorkshire Shepherdess" This is the lady (with umpteen children) who lives in the middle of nowhere on the moors.

Should keep me busy for a while. I'll keep you posted on how I get on with them.
All books read recently have been added to the  'Books Read 2017 Page'.

Thank you for all the comments on our beautiful grandchildren......... I do like being a Nana!

Back in a flash
Sue

Posted by Sue in Suffolk at 06:30
Email ThisBlogThis!Share to TwitterShare to FacebookShare to Pinterest
Labels: Library book photo