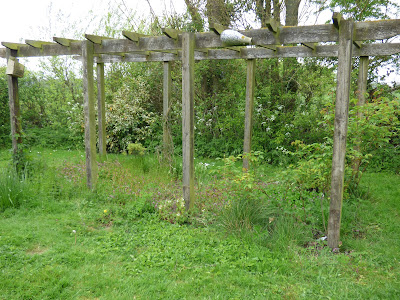 This was the pergola thing at the bottom of the garden when we arrived. I cleared all the weeds and weed-proof membrane from underneath and found lots of the posts were rotten.
We didn't really want it anyway. It must have been a good idea when it was built but now just an eyesore.

So with a bit of hammering, unscrewing bolts and taking down, now it looks like this. 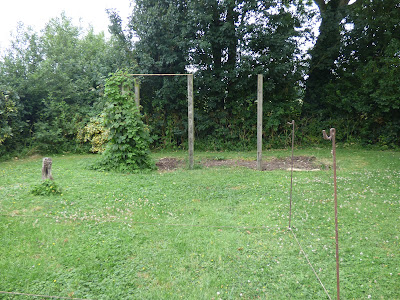 At the moment we've left the Hop, just to see if it does actually produce any hops. The post it's on is rotten, so needed a couple of posts left to prop it up and the other posts are still there because they are concreted in and need some effort to get out, but will be dug out later.

The cross beams of the pergola were still OK and I suggested we use them as the edges for a new bed for raspberries and Col said 4 of the posts would make another edging for a strawberry bed.

So using metal stakes and rope we measured out 2 square beds. It was while I was standing holding the end of the tape that I noticed something I recognised growing just in the foot of the blackthorn hedge that's between us and the field. 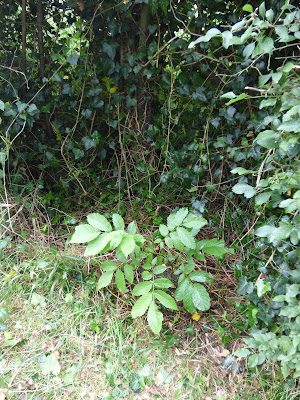 I fetched the loppers and we cut away the blackthorn hedge that was all around it and quite a way above,  then pulled out all the ivy from the ground. Gave it a good  watering and hopefully it will grow into a fine walnut tree...........in about 50 years time!

The two long rails of the framework will be used for edging the 5th vegetable bed in the garden, the only one without anything around it. I'm not sure when we'll actually get the 2 new square beds made as the ground is like rock after our dry month.

Posted by Sue in Suffolk at 06:00
Email ThisBlogThis!Share to TwitterShare to FacebookShare to Pinterest
Labels: The Garden