We had rain yesterday, though it was more like RAIN in capital letters as it came down hard and fast while the wind whipped the trees into a frenzy and the electric went off for 7 hours. We were OK as we had the LPG range for boiling a kettle and cooking dinner. I took round a flask of boiling water to our neighbours - (the ones who won't share the driveway costs) so they could have a hot drink, in the hope it will make them feel guilty!!
We rang the power people to notify them of the outage and found we could get text message updates on their progress at restoring power. What a handy service! All afternoon we kept getting little messages telling us what was happening and what time they hoped to fix it by.
They got it fixed just as it was getting dark.


And the book bit............after months of finding no books in charity shops, I  acquired 4 from various places over the last 3 weeks. 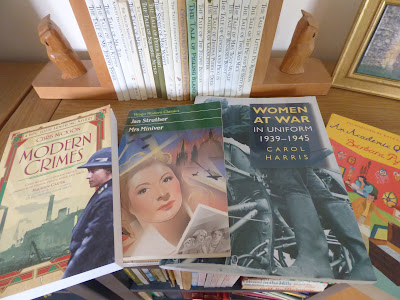 Left to right
Modern Crimes by CHRIS NICKSON.
Last time I saw my Penny Pincher friend A she mentioned that Nickson had started yet another series, I checked the library website, found they didn't have it and then forgot all about it so when I spotted this I knew exactly what it was and snapped it up for 50p.
Mrs Miniver by Jan Struther.
This is a WWII classic and I have read it  but didn't own a copy. Winston Churchill  credited the film, which was made from the book in 1942, with increasing American support for the war effort. Oxfam Bookshop so £1.99
Carol Harris - Women at War In Uniform.
Another addition to my collection of WWII books. Haven't read this. Also Oxfam Bookshop £1.99.
Barbara Pym - An Academic Question.
Pym is an author I didn't read  when working in libraries through the '70's  in fact I don't remember them at all. Reading the details about her on Fantastic Fiction I see that she had 6 books published between 1950 and 1961 ( before I was reading!) and two in the seventies but then four more were published after her death in 1980. It also says that when TLS asked critics to name underrated authors Pym was the only author mentioned twice, which brought her back to public recognition not long before she died. A short book, quickly read, the fourth of her books I've read and enjoyed. Another 50p purchase, which I'll now pass on to a friend.

Many thanks for comments about the Calamondin tree. Maybe it is edible after all, but will I be able to keep it alive long enough to find out?
Thank you also to everyone who has clicked the follower button ........welcome.


Posted by Sue in Suffolk at 06:30
Email ThisBlogThis!Share to TwitterShare to FacebookShare to Pinterest
Labels: Charity Shop Finds