Our Story Continued from Yesterday

So there we were May 5th 1992 at last on our own smallholding.There were two reasons it was the cheapest 5 acres in Suffolk first  it was a mess and very run down and secondly there were two huge pylons from the sizewell power station just over the boundary at the end of our field.
We spent the first two weeks living in our touring caravan because the house had to be completely rewired before the building society would release all the mortgage money. Before we could move the caravan in we had to cut the grass around the house, which was a foot tall in places, so that we could find a level place to park.
The chalet bungalow had been built in 1955 and had had no money spent on it in the 30+ years. There were several old buildings and a 4 acre overgrown field. The first month we were there we asked a local farmer to cut the hay meadow, but he refused saying he didn't know what rubbish was laying about among the long grass and we later pulled out lengths of wire and old machinery.

This aerial photo is from the early spring of 1993 a year after moving in,the digger was there putting in a new septic tank and one for the campsite too. By this time we had re-roofed the house and a start was soon made on vegetable gardens and much of the mess had been cleared. There were 2 old caravans on the land that had to be knocked to bits and scrapped, 3 Farm buildings full of rubbish, some cold frames that had collapsed and everywhere bits of broken glass. Broken, we were told, by the alcoholic man when in a rage! 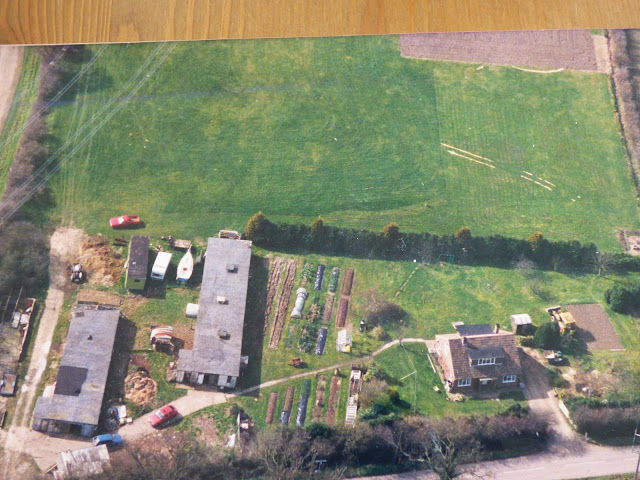 And this below from about 2002/3 not sure which without more research. 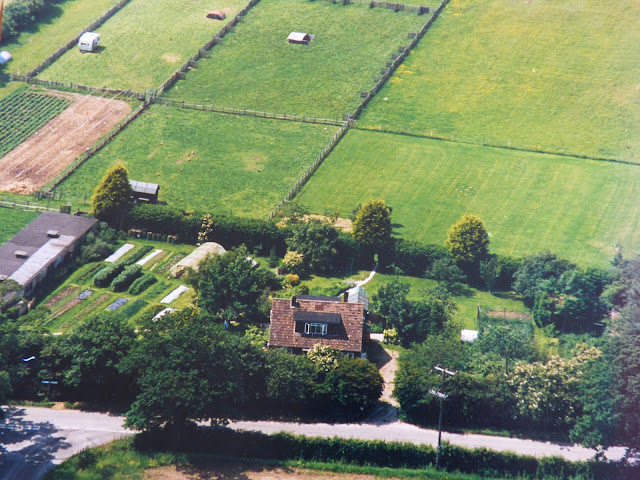 Over our 23 years there we kept goats and sheep, chickens by the hundred and pigs now and again. We planted well over 250 trees and became almost self-sufficient in fruit and vegetables, milk and meat and also heating the house with wood. We replaced the old buildings with modern and there was soon no sign of what a mess the place had been. The campsite - A Camping and Caravanning Club 5 van site was started in 1994, became well established and after adding new toilets, shower and recreation room we were very busy, often full at weekends and through the summer holidays.

In 1992 when we bought the smallholding it was the done thing to have an interest only mortgage and an insurance to pay off the balance at the end. Around about 1998ish we started getting letters from the building society warning that there wouldn't be enough money in the insurance to pay off the mortgage. So we changed to a repayment mortgage and set about paying it off early. It was around this time that interest rates shot up to 16% for a while. Obviously to do this is meant being frugal, but of course after all these years we were old hands at managing on a small budget. We found that if we saved all pennies and spare pounds until we had £500 we could make a repayment of the capital. Then we would write a letter asking for a year to be taken off the mortgage term ( I don't know if this is still possible nowadays but I would recommend finding out because if it is then this is a AMAZING way to pay off mortgages quickly). In this way we'd paid for the smallholding by 2007. Ten Years Early!
Our Children grew, the eldest two went through university and then left home and the youngest moved out too in 2005.
When my Dad died and left us some money we spent a lot of it in 2011 building an extension to the bungalow with a lovely big kitchen and upstairs master bedroom with en-suite. The rest of the house was re-configured at the same time and we also added a conservatory.
Col carried on working as a Bridge Inspector for the County Council but once we paid off the mortgage and then saved a bit of money, he had a plan to retire at age 55 in March 2012 and earn a living from the campsite, smallholding and odd-jobbing. And that's just what he did, although carried on for another year working for the council one day a week.

We had a busy year in 2012/13 getting the things that would earn us money more established and all was going well. Then in the summer of 2013 having rarely had a day off all his working life Col had health problems which ended up with him needing stents fitted to prevent a heart attack. Although this was sorted we had to slow down a bit on what we were doing and in June 2015 decided to put the smallholding up for sale so we could have a change of lifestyle. We hadn't been able to have a holiday during the summer for many years and with the campsite so busy it was difficult to even get a day off between May and September ........... we bought a cheap touring caravan off ebay and lots of travelling was planned.
It took an age to find a buyer for the smallholding, not everyone was willing to take it on or to live with pylons so close .........so it was November 2015 before we had a buyer and then we  soon found a small  bungalow to live in while travelling. But  things got delayed and it took even longer to get everything sorted. Unfortunately by November more heath issues had appeared although we didn't know what they were.

Thought at first to be some sort of anemia or stomach ulcer, Col was diagnosed with Mantle Cell Non Hodgkins Lymphoma in January 2016, and we started the regular trips to hospital. Our buyers delayed things a lot and we finally got moved to the small bungalow in Ipswich in March 2016 and he spent until October 2016 having treatment which seemed to be working. After just a few months in town we knew it wasn't really for us and  we also realised we probably wouldn't  travel as much as we planned and then in October, when we thought he was going to get well again, we spotted a cottage in a lovely position down a lane in Mid Suffolk and knew it was just what we wanted. But  a few weeks later Col was told his treatment hadn't worked and he  was put on a different sort of chemo tablet. By then we were so hooked on the cottage we decided to carry on with the purchase but once again moving was delayed by a mix up at the solicitors, so that only  3 days after moving in on 1st March we were told  the new tablets were not working either and they would try a radical new untested drug.

So here we are in the cottage at the end of a lane in a very quiet part of Suffolk, still going through the ups and downs of chemo tablets and hoping for a donor stem cell replacement later this summer - Fingers crossed that it works.

Posted by Sue in Suffolk at 06:00
Email ThisBlogThis!Share to TwitterShare to FacebookShare to Pinterest
Labels: Our Story