Instead of a holiday

We're not having a holiday this year. There are too many hospital appointments and soon Colin will be in for the stem cell transplant and then he certainly won't be well enough for months after that.
Over the last few weeks, instead of a holiday I've spent a little money on hobbies and interests.

First........................ a subscription
Sometimes I stand in W.H Smiths or a supermarket and look at the magazines, sometimes I pick one up and flick through but I  very very rarely buy one.........they are so expensive and all blinkin' adverts and I didn't have any subscriptions to anything since Craft Creations stopped.( I remembered to cancel the 3 months for £5 offer on Kitchen Garden Magazine) 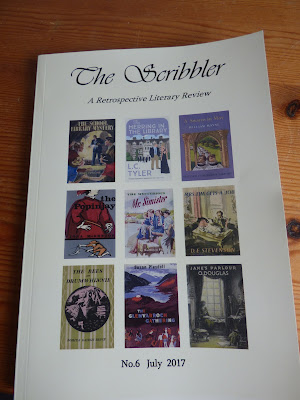 A while back I came across  The Scribbler. It's about my favourite subject - BOOKS and published 3 times a year by Greyladies Publishing who publish

I sent for a copy last year and enjoyed it, lent it to a friend who also read and enjoyed and eventually, a couple of weeks ago, decided to subscribe. This is the first of my years subscription. A good read.

Second.............. some plants
Having decided to create a bed for flowers for cutting I ordered some Tulip bulbs and Alstromeria and Monarda plants
I already have Sweet Pea,Cornflower and Sweet William seeds and there might be room for something else - probably something to use as a filler in flower arrangements (or, as they are called here- shoving some flowers in a jug!)

Third..............something for the mantle-shelf.
The first time we've had a mantle-shelf or mantle piece for years and  I don't want the same things on it all the time. My plan is to change things with the seasons or a bit more often depending what I find. I've got very few ornaments as I had nowhere to put anything at the smallholding apart from the dresser and my rule will be  ........................mostly second-hand and cheap as possible. 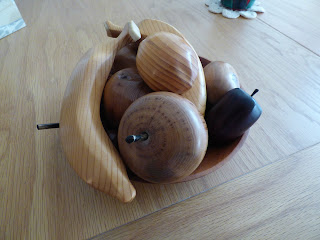 Normally I would have walked away from this bowl of lovely wood-turned fruit at a car boot sale as they were £5, but then I remembered the Autumn mantle and the 'instead of a holiday' and they came home. I've bought something colourful online as well and that will be on the blog later this month.

Fourth - I kept looking on ebay for some Derwent watercolour pencils and eventually got a tin of secondhand hardly used 48 colours for my Country Diary of an Edwardian Lady Colouring Book for just over £10 plus postage. The only problem is 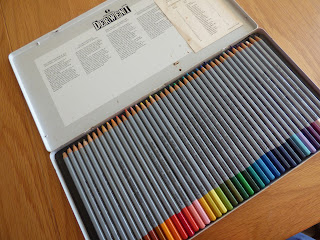 
I've counted the Lindt Lindor chocolates that came from Approved Foods as an 'instead of a holiday' treat too - haven't eaten them yet - might need them to cheer myself up when Colin is in Addenbrookes!