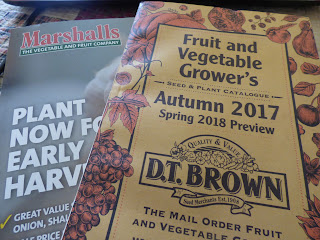 Time to look through the seed tin to see what we need for 2018.

On the whole I think we choose right when deciding what to grow in a much smaller area than we had at the smallholding. We didn't bother with carrots, parsnips and onions which are probably the cheapest vegetables to buy, and peas and sweetcorn which are cheaper and just as good to buy frozen.
The second sowing of French Climbing beans and Mange Tout peas didn't do well - successional sowing doesn't seem to work well in Suffolk as it always seems to be too dry at the wrong time.
Trying to squeeze so many things into the greenhouse wasn't entirely successful and  the aubergines suffered. Courgettes didn't set well due to pollen beetle so we didn't have many early on in the season.
We will have a little more room next year as there were several Dahlia tubers at the end of one of the beds which will be moved to the front flower bed now it's been cleared of grass.

So we'll stick to much the same things. I'll need to buy fresh aubergine and squash seeds. More Beetroot, Leek,  Mange Tout and another variety of Cucumber. Also need Plum Tomato seeds and some mini plum type too. My saved seed of French Climbing beans are getting really old so probably need to buy new and start again. I'll save runner bean seeds as there are several still on the plants. I'd like to grow a few ornamental Gourds for next Autumn's mantle shelf too.

Now comes the fun of choosing varieties and working out best value, that's a job for a cold winters day. Gardeners always have something to look forward to! 😊


Posted by Sue in Suffolk at 06:00
Email ThisBlogThis!Share to TwitterShare to FacebookShare to Pinterest
Labels: Greenhouse growing, Growing Food