What a difference and other stuff

A couple of weeks ago I drove us to Addenbrookes Hospital and back. This involves keeping up with the cars rushing along at 70mph and the huge lorries all the way along the A14 then some of the A11 for 54 miles before turning on to a quieter road to the Park and Ride at Brabraham just outside Cambridge.
Nothing to worry about................. but look what I wrote back in 2013 when Col was first in Ipswich hospital when he had heart problems. We were living at the smallholding 22 miles from the hospital along a road I'd been driven over hundreds of times...........................

I got extremely brave and drove to and from Ipswich yesterday to see him and to take him more books. But I was a shaking wreck by the time I got home!

I'd spent 23 years at the smallholding not really needing to drive far, just round the small lanes to the two small towns. I was so out of practice. One good thing to come out of the last few years is that I can drive around towns,country roads and busy main roads without getting into a panic - like most other people have always done.

We had a surprise on the way home from Cambridge as the Red Arrows went zooming over the road and off away and then a few minutes later around again. They weren't trailing their red, white and blue smoke when we saw them but were in formation. Then late afternoon when we were home there was a huge noise and their nine planes went roaring over head on their way back to their base in Lincolnshire. Col looked on line and they had been the last flying display at the Clacton Airshow. A fantastic sight even for a few seconds. I've seen them doing their display many years ago - amazing stuff.

I've been envious of other blogger's photos of butterflies. I never seem to have a camera ready at the right moment, but this Speckled Wood was sunbathing yesterday on the shingle driveway just outside of the  conservatory where I was sitting  and stayed long enough for me to grab the camera. 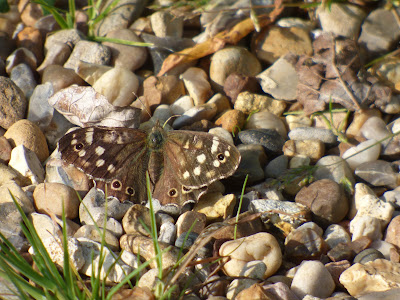 Very well camouflaged from a distance.


Thanks for comments about food waste and the Co-op. I doubt we will pick up many bargains as our local Co-op is in the wrong direction for when we go to hospital and we seem to do most errands on hospital days.
Hello and welcome to a new follower, hope you enjoy reading.

Posted by Sue in Suffolk at 06:00
Email ThisBlogThis!Share to TwitterShare to FacebookShare to Pinterest
Labels: Butterflies, Natural world