"It is, in my view, the duty of an apple to be crisp and crunchable, but a pear should have such a texture as leads to silent consumption".

So said Edward Bunyard author of The Anatomy of Dessert, a book written in 1929  (which I haven't got! but read this quote in another cookery book. Bunyard was the son of a Kentish nurseryman who bred and sold fruit trees and bushes, amongst other stuff; there is still "Bunyard's Exhibition" broad bean.)

The pears on one of our small trees look awful, spotted with brown and black, but under the peel they are OK.

We've been picking up windfall pears from this tree to eat  and some have been soft and juicy while others are hard and just a bit gritty proving another quote from the same book  " A pear is only truly delicious for 10 minutes!".
We know from the shape of them that the other pear tree is a Conference and none have fallen yet - so they will be ready later than this unknown variety.
According to my River Cottage Fruit book, you have to pick pears when they are hard and then ripen them in a cool, dark dry place until they are almost ready  and then bring them into the house a few days before you want to eat them. How you judge all this when they look so poor anyway is anybodies guess!

I used most of the above pears to make a caramelised pear upside-down sponge cake/dessert. The pears were peeled and cored and cut into small bits and cooked in a little butter and sugar until they were golden and sticky. Then I put them in a baking tin which I'd lined with parchment and made up a sponge mixture (eggs,butter,sugar and SR flour) to put on top. Cooked until the sponge was done and turned out onto a plate. 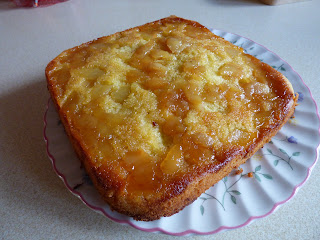 Should have used more pears but otherwise looks tasty. This will be Col's dessert through the week.
While the oven was on I also made a pepper, onion and cheese quiche for two days dinners and cooked some chicken thighs for the rest of the weeks lunch-time sandwiches.

Thanks for comments about the jumble sale finds
Back Tomorrow
Sue

Posted by Sue in Suffolk at 06:00
Email ThisBlogThis!Share to TwitterShare to FacebookShare to Pinterest
Labels: Apples and Pears