The small apple tree and the Conference pear tree had, sometime in the past, both been clipped by a mower which had pushed them over , there was no way to cut the grass underneath them.
The apples had finished on the little tree, no idea what variety they were but definitely an early sort that soon went woolly, so Col banged in a stake one side and a prop on the other and then pulled the apple up and tied it to the stake with an old bit of rag. 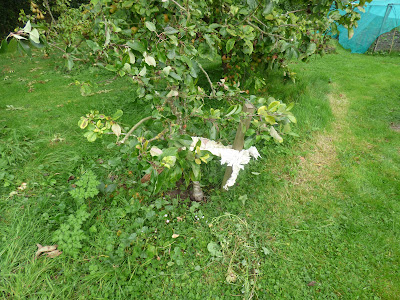 The Conference pear tree is also leaning badly but the pears aren't ready yet so the tree is just propped up at the moment. 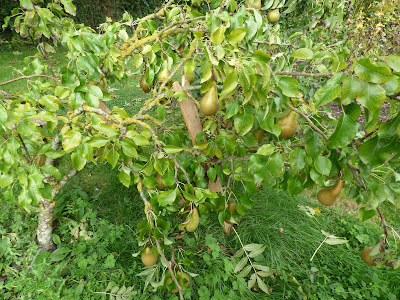 Col picked all the  pears from the other bigger pear tree as they were falling fast - he got a whole trug full - they don't keep, so apart from a few to eat in the next few days, the rest have gone in the freezer.
Next time the  little mower is out we'll be able to get right under the little trees.

Thanks for the good wishes for our Son and Daughter in Law and their new arrival due April, we are very excited that all of our children will be parents soon. As they are also in Suffolk and nearer than youngest daughter we hope to see lots of this grandchild. We don't get to see grandson from Surrey very often and every photo shows him growing up so quickly.

Posted by Sue in Suffolk at 06:00
Email ThisBlogThis!Share to TwitterShare to FacebookShare to Pinterest
Labels: Apples and Pears, Family