Stage 6 of the Tour of Britain Cycle race zoomed through Suffolk yeserday.
They started in Newmarket on the Suffolk/Cambridgeshire border and zig-zagged  through lots of villages and small towns, touching the edge of Ipswich before going through Saxmundham, passing the end of the road where we used to live, through Leiston where our youngest lives and finishing at Aldeburgh on the coast.
We decided to go and watch at the closest place to us which was the little town of Eye- 5 miles away. 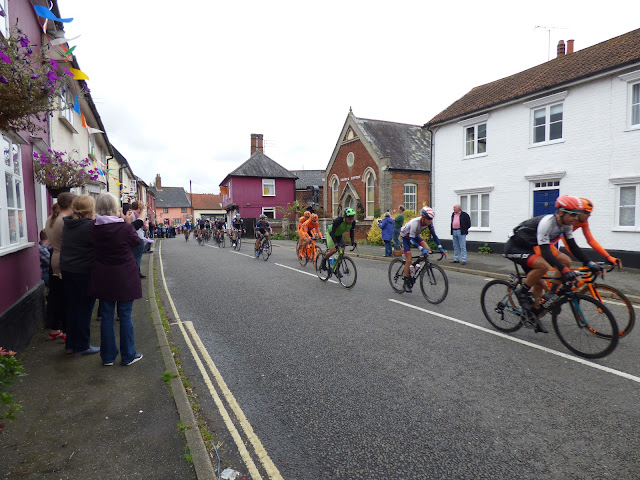 Lots of people had come out to watch - but not quite lining the streets three deep!
First were the police motorbikes stopping cars coming out of side roads then a breakaway group of 7 cyclists and here is the peleton a couple of minutes behind. Love the guys in bright orange with orange bikes - the CCC team - easy to spot them when I've been watching on TV during this week. Following behind were all the support cars with the spare bikes, several police cars and ambulances and then they'd gone.

By which time is was 1 O'clock and we went across the road to that purple coloured building which is a Chinese takeaway and picked up a meal to take home. Had to try it out as it's our nearest and it was our 38th wedding anniversary so a celebratory meal.
Just got home and the rain came down in torrents - poor blokes.

(EDITED IN TO SAY APOLOGIES, SOMEHOW JUST DELETED A WHOLE LOAD OF COMMENTS WITHOUT EVEN READING.THINK I'D BETTER TAKE THE COMMENT MODERATION OFF!PLEASE LEAVE YOUR COMMENT AGAIN)

Back Monday
Sue
Posted by Sue in Suffolk at 06:00
Email ThisBlogThis!Share to TwitterShare to FacebookShare to Pinterest
Labels: Local Events