Last week Col dropped me off in the town centre when he went for his regular blood test and clinic appointment at the hospital. I had a couple of hours with not many places I had to go which gave me time to trawl the charity shops. I've not found anything I wanted in any charity shops anywhere for months (August was the last charity shop finds post) so it was quite a surprise to pick up 3 things. 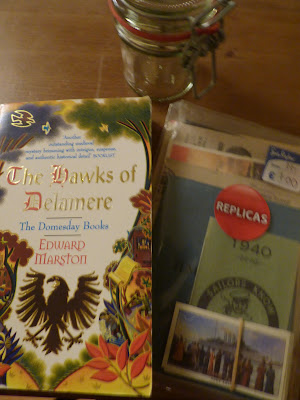 Another little kilner jar, this one will be for the herb and spice shelf it was one whole £.
The pack on the right is something I've never before seen in a charity shop or boot-sale. It's a Replica Pack of paper memorabilia  from WWII. I've seen them at museum shops and always wondered what sort of things they had in them, never bought one as they are £6.95 new.The company (Sweet and Nostalgic) produce all sorts of packs from The Blitz and Home Front to Childhood of the 60's. I think they are really a teaching resource? Anyway this one was all about The Navy and the war at sea and it was £1.
After opening and reading all the bits I'm glad I've never paid full price for a set.

The book on the left was rather a punt because I have been trying to collect  this series of books of historical crime for years and years. Written by this prolific author back in the 90's, they are quite hard to come by. At one time I had a list in my bag of the titles I hadn't got but of course it  isn't in my bag now. There were 3 of the series in the charity shop and I recognised the other two covers but wasn't sure about this one, but at 99p I thought I'd risk it and Great Joy it was one I didn't have. I've now got 8 out of 11, when I've got all 11 I'll start reading them.

Then I had to hang around waiting  for Col to pick me up for half an hour as it got gradually darker and colder as he'd got held up in traffic between the hospital and town. I was glad to get home. I used to love a couple of hours in town to rootle around in charity shops but must be getting old.


Back Tomorrow
Sue
Posted by Sue in Suffolk at 06:00
Email ThisBlogThis!Share to TwitterShare to FacebookShare to Pinterest
Labels: Charity Shop Finds