We went down to the beach hut on Friday to check and oil the padlocks and to bring home anything that might get damp - like the coffee in a jar.
It was a beautiful morning, the sea was flat calm. 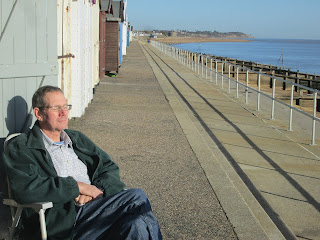 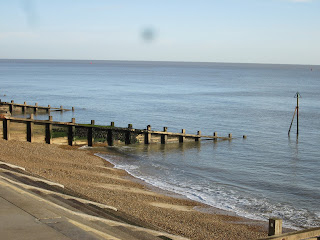 Just a few dog walkers about. One lady had 4 golden retrievers - blimey!

We've been able to put off selling the beach hut for a year as the council had so much opposition to their plans to alter fees that they've "re-considered" and have decided against huge increases in ground rent - for now anyway. They wanted people to take on long term licences, paying up front for several years at a time but have given up that idea. They also planned 10% increases every year for 10 years but have put off that plan for a while too. They still intend to charge people buying a hut a £300 fee "administration" charge rather than the £30 we paid in 2016.
We didn't really make the most of the hut this summer so will still have to think about things this time next year.

As we locked up again the sun disappeared behind some clouds and the temperature dropped by about 10 degrees. We went into town and toured the charity shops finding.........Nothing.

Then into Ipswich to pick up Col's tablets from hospital, Asda for shopping and home.

When we drove home the water company were on the corner near the house repairing a leak that Colin noticed on Thursday  and rang in to report. Thank goodness they soon got that done as they were really losing a lot of water, it was  pouring out of the verge and flooding right across the road.


Back Soon
Sue
Posted by Sue in Suffolk at 06:00
Email ThisBlogThis!Share to TwitterShare to FacebookShare to Pinterest
Labels: Felixstowe