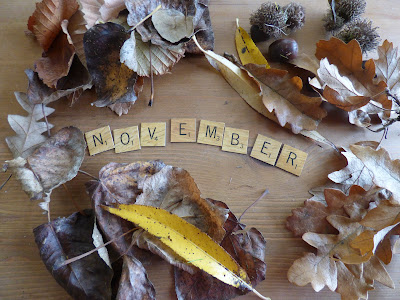 November, the Ninth month of the old Roman Calender. The Anglo-Saxons called November Blodomonath, which means Blood month, it was the month when surplus animals were slaughtered and salted down for the winter.

From around the 8th Century the Catholic church declared November1st  as All Saints' Day commemorating the Saints and Martyrs of the Christian Faith who didn't have their own days also known as All Hallows Day (Hallow meaning Holy, Saintly or to respect greatly, in old English) hence 31st October being Hallows'eve which turned into Halloween.

November 2nd is All Souls' Day when prayers were said for souls in purgatory. These 3 days in the  calendar are the Christian version of the ancient Celtic Feast of the dead or Samhain (From sunset on the 31st to sunset on the 1st) which marked the end of the harvest season and the division of the year between the lighter half of summer and the dark of winter. They believed the veil between this world and the other-world became porous allowing the spirits of the dead to pass through.


If there's ice in November to bear a duck
the rest of the winter just mud and muck.

That's one of the well known weather sayings for November and there are several more in my books of weather lore, many linked to St Martin's Day on the 11th.

So many sayings, can any be true?

From Sara Coleridge's months of the year poem

Dull November brings the blast
Then the leaves are whirling fast

"It should be in this order...........walnut, sycamore, horse chestnut, lime, ash; then elm: then beech and oak; then apple and lastly young beeches and pollarded oaks, which may retain their withered leaves until they are pushed off by new growth in spring"

No sun, no moon,
no morn, no noon,
no dawn, no dusk,
no proper time of day
No sky - no earthly view,
No distance looking blue.
No warmth, no cheerfulness, no healthful ease,
No comfortable feel in any member,
No shade, no shine, no butterflies, no bees,
No fruits, no flowers, no leaves, no birds,
NOVEMBER


Thank you for comments yesterday, the bats and ceramic pumpkin from the mantle-piece will be put away tomorrow leaving just the autumn decorations until the end of the month.
I was interested to read all the various blog posts and comments about Halloween, like Christmas it seems to stir up lots of love/hate reaction. If you ignore the commercialism part, both Halloween and Christmas have been around for a lot longer than us and probably still will be long after we've gone. I can see no point in getting overwrought about either.

Back in a jiffy
Sue