On the last Saturday in October we usually pop down to the edge of Colchester for the Big NSPCC secondhand book sale. We started going years ago when we were selling secondhand farming and country books at Country shows  and it was difficult to stop going when we stopped selling!
There is always a long queue well before the 9.30 start and I've queued in rain, sun and one year it was sleety snow, this year it was dry but blinkin' cold.
Here's the queue, shivering 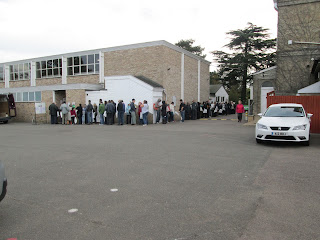 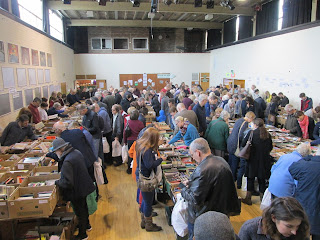 And here's everyone rummaging and this is what I came home with................... Some lovely Christmas books, I'm collecting them for the future for the Grandchildren 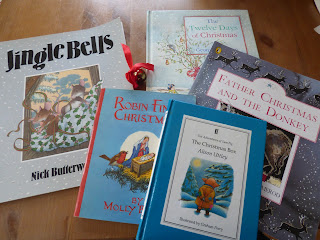 And some for me and Col, I spent too much as usual but it's for a good cause (that's my excuse anyway!) and didn't find anything I was actually searching for 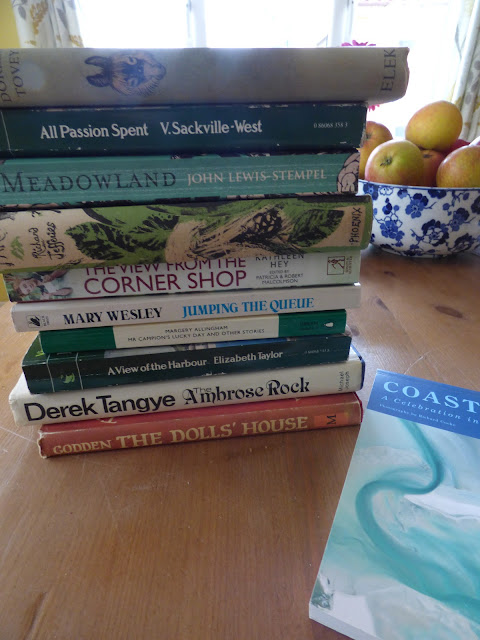 There's an old Derek Tangye there and Doreen Tovey's Donkey Work. Another Mary Wesley and a couple of Virago. Picked up Meadowland to read after reading  Running with Hares last month. "View From the Corner Shop" is to add to my WWII collection. Also above is a book of postcards featuring the Royal Mail Stamps that showed aerial views of the UK coastline, I'll pop that in with some other small things I'm collecting for my friend for Christmas.

Another book I bought, not in the photo, is a massive tome called "England In Particular", a book I borrowed from the library sometime last year, but it's not a book to be read straight through, definitely a reference book to keep.......  "A Celebration of the commonplace, the local, the vernacular and the distinctive." From Abbeys to Zig-Zag Paths, an A-Z of all things English. 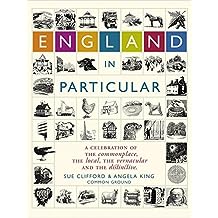 I think you may well find me quoting from this on all sorts of subjects!

I picked up the book on the bottom of the heap........The Dolls House by Rumer Godden because the illustrations are by Tasha Tudor but flicking through it reminded me of something? Then I remembered a childrens TV programme Pinny's House? Looked it up...Pinny's House was an Oliver Postgate and Peter Firman animation, but according to one web page it was from a book called Tottie's House By Rumer Godden. Then another web page mentions a TV animation called Tottie . So  were there two TV animations about tiny dolls in a dolls's house? Seems there were. Rumer Godden's book was reprinted later with the name changed to Tottie to match the programme and Pinny's House was completely different, not taken from the book at all.

Posted by Sue in Suffolk at 06:00
Email ThisBlogThis!Share to TwitterShare to FacebookShare to Pinterest
Labels: Charity Book Sales