Old Apple Tree, we Wassail thee
and hope that thou will bear
Hats full, caps full ,three-bushel bags full
and a little heap under the stair.
Hip Hip Hooray

A few  centuries ago apples were a very important crop, they made cider and at a time when water wasn't safe to drink cider and beer were the drinks of the masses. Farm workers would be paid partly in cider or beer and some varieties could be kept stored for months. A poor harvest was a disaster.
Wassailing ( Wassail comes from the Anglo Saxon waes haeil  = Good Health)  was an ancient custom in cider producing areas although villages in many parts of the country had their own versions of the ceremony. Pieces of cider-soaked toast were hung on the oldest or largest trees in the orchard, wassail songs were sung, cider was poured onto the roots of the trees. Finally shots would be fired through the branches and pots and pans banged together to ward off the evil spirits.

We went out and wassailed the trees at the smallholding especially after the only year when the big old Bramley Apple failed to set a single fruit.Think it worked as it never failed again.

I haven't got any cider but do have a small carton of apple juice in the cupboard - hope that will suffice to appease those spirits.

Why Old Twelfth Night? This is all to do with the change from Julian to Gregorian calendar in 1752  when 11  days were lost. The 2nd of September was followed immediately by the 14th. A lot of people refused to use this new calendar, especially country people.

Last year was a fair year for apples but a bad year for storing them. Hopefully 2018 will be better. 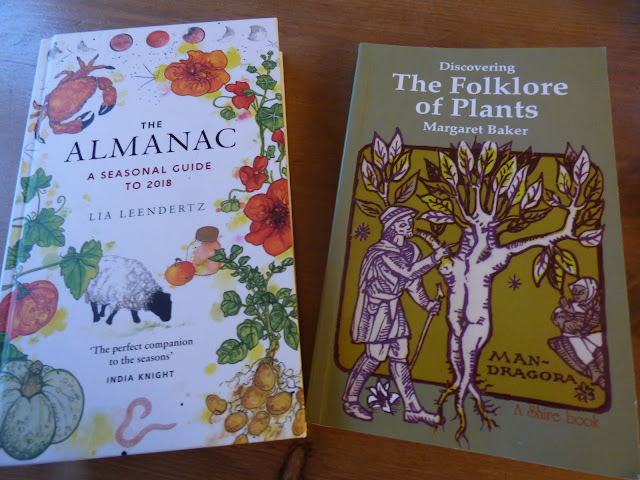 Two more books from my shelves. On the left a little gem of a book - Christmas present from my wish list and on the right a book that I've had for ages - full of useful information.

Weather forecast for today is windy and cold, maybe even snowy....... think of me out there tonight............ dancing round the apple trees!