6 were twisted in half and cut  to make 12 halves which look much  more than 6 whole!
They were used in a Toad in the Hole and fed three people when served up with roast potatoes, parsnips, carrots and cabbage and plenty of gravy.
The remaining 2 had skins removed and were squished flat and put in the bottom of a pie with half a chopped onion that had been softened in the microwave, a couple of rashers of bacon chopped into small bits and two beaten eggs poured over the top and a thin pastry lid.
This is enough for two meals for us, once with veg and again with chips and tomatoes and as Colin isn't eating much there was even some left for me for two days lunch . 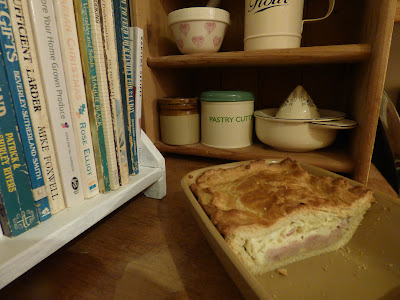 Terribly fattening but very tasty and filling.
And one way to make 8 sausages =  9 meals.

Back Tomorrow
Sue
Posted by Sue in Suffolk at 06:00
Email ThisBlogThis!Share to TwitterShare to FacebookShare to Pinterest
Labels: Recipes, Thrifty Lifestyle