The Folklore bit...........
Last night or rather very early this morning there was a full moon.The first after Christmas - known as the Wolf Moon. This was the first of two full moons in January  and there will also be two full moons in March, twice in a year is something that happens only about 4 times a century. The second Full Moon in one month was known as a Blue Moon, thought to come from the old English word for betray because two full moons in one month caused confusion over the timing of Easter.
That's where the saying "once in a blue moon" originates
( Information from my Country Wisdom and Folklore Diary)

Living within our means is something we have done for all of our married life until last year. The budget went pear-shaped due to illness and moving.....twice, and for the last year the savings have been disappearing at a great rate. We have no debts and still have savings- just less than we had before we moved here!

A New Year and a new start.

Take care of the pennies and the pounds will look after themselves, is what they say.

Our income will remain the same through the year, made up from Col's County Council pension, whatever they decide to let us have from Employment Support Allowance and a bit of interest on savings, the total is around £1000 a month, we may still need those savings I think, but £1000 a month is still more than many people have so it ought to be doable, it will be a good challenge.

Starting now..............
January is always a good month to spend less, as the freezer and cupboards are well stocked. Our Eldest and family will visit from Surrey sometime this month so I need to plan for a family get together meal. I shall  also have to buy cat food, diesel for all the Addenbrookes trips of course, milk and fresh produce and replace anything used from the cupboards. Standing Orders for Charity, phone and broadband as usual.

No utility bills due in January and we won't need to top up the oil tank  either as it seems to be lasting well. We've not had oil central heating before so had no idea of how it would last. Through the summer it was on hot water only for two hours twice a day, backed up by the solar thermal panels on the roof, then 2 hours twice a day for heating too as the weather got cooler. Since December the  boiler has been on for 2 hours x 3 times a day and with the wood burner lit before dusk each day we have found we've been warm enough so far. (We always take  hot water bottles to bed in case of feeling cold  during the night when the heating is off).
Neither car needs insurance, tax or MOT this month and there are no birthdays and no car boot sales.
It should be a low spend month.


I'll be back tomorrow, with a closer look at the rest of the year of budgeting
Sue

PS Jigsaw finished, all present and correct and looked brilliant when done. I shall put a sticker on saying "checked December 2017" and hope I can sell it at a car boot sale for more than the £1  paid for it. 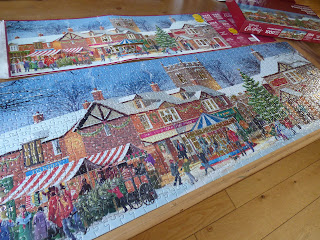 Posted by Sue in Suffolk at 06:00
Email ThisBlogThis!Share to TwitterShare to FacebookShare to Pinterest
Labels: Folklore, Thrifty Lifestyle