A PS at the beginning +DVDs + Financial Surprise + Sold out

Anyway,
DVDs
The one on the right we've had for several years 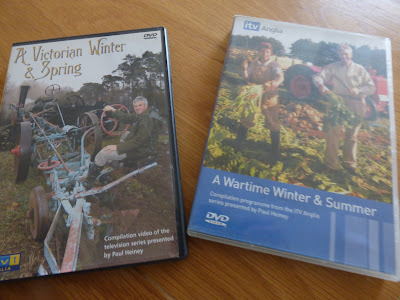 on the left is the DVD I got for Col for Christmas. Both were originally filmed for  Anglia TV back in the early 2000's.
Paul Heiney is a quiet presenter, he doesn't talk too much, lets others speak. The dialect and accent of the old Norfolk and Suffolk farmers filmed talking about their memories is wonderful. And something rarely heard now although Col's brother who has worked on the same Suffolk farm all his life and still talks 'Suffolk' comes out with an old word sometimes. He's got a cough and said he kept tissicking!
They try out some original recipes in the wartime programmes - Mock Duck which is sausage meat and Mock Apricot Flan - made from carrots are two I remember. Some tasted better than others!

We often watch DVDs on a winter afternoon, not films, but things like those above. We've got some of the Ruth Goodman et al programmes - Victorian farm, Edwardian Farm  and the best - Tales from the Green Valley plus the whole series of The Good Life and The Coal House  and Hannah Hauxwell. Col's got some Fred Dibnah DVDs too - I'm not so keen. We've  also got a few of the East Anglian Film Archive DVDs  -  The Home Front, East Anglia at War; Suffolk Past and Old Railways.
Maybe I should look out for more of the same at car boot sales but probably a bit like looking for a needle in one of the Victorian Farm haystacks!

Had a nice letter in the post from Suffolk County Council. Not sure why/how but during last year there was an increase in pensions based on the lump sum and we are due a handy £500 bonus at the end of the month. That will cover some costs for the year............... I'm very glad he did his 30 years with the council.

Aspall, the company that produce Cider/Apple Juice/ Cider vinegar,- just a few miles away from us has been sold to a US  beer company - Molson Coors- after nearly 300 years in the same family and on the same site. They say they'll carry on producing local apple products but................
Last week the news was Colman's Mustard closing their Norwich site after 200 years, but they had already sold out to Unilever many years ago. I bought a 1lb tin of their mustard powder  3½ years ago and still have about quarter left but I may stock up with another big tin or two just in case.

Posted by Sue in Suffolk at 06:00
Email ThisBlogThis!Share to TwitterShare to FacebookShare to Pinterest
Labels: DVDs, Memories