Hello and BIG welcome to some more new followers


Weekend in Addenbrookes
Col had a liver biopsy on Friday morning, then had to be rushed off later to have a bleed from the liver stopped. On Saturday night they moved him from  a room on his own to a bay of 5 beds because there is That Flu in the hospital and someone  needed isolation. Luckily the ward is quiet-ish. Visited Sunday morning and found he'd had high temperatures overnight, but wasn't on antibiotics as yet, later he texted to say he was now on anti-biotics and had also had an chest X ray - because they thought he was coughing too much. Still waiting for various results
Thought he might be home early this week, now I'm not so sure.😟

Last week...............On Sunday morning I looked out of the bedroom window and saw two Hares on our meadow near the workshop........ I thought  "lovely".
When I went out to the car later I noticed a Muntjac on the field just beyond the ditch... I thought "keep away from our new trees you!"
On Wednesday when I was ironing I looked out of the window and saw 2 squirrels, one hanging upside down on the big peanut feeder, biting through the wires on the base and I watched as all the peanuts fell out -it's a home made feeder, not particularly sturdy. I opened the window and shouted "Go away- you pests". ............They went as far as the trees on the other side of the lane and then came back for the peanuts. 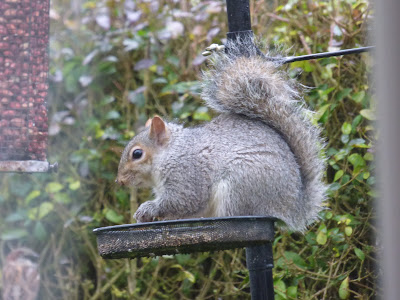 Look at that beedy eye watching me indoors. He's moved to the seed tray now - dinner on a plate! 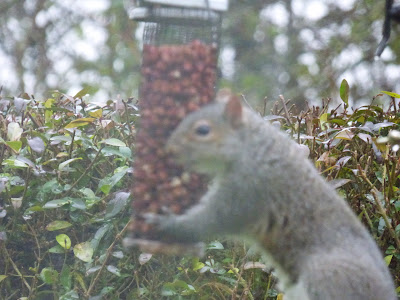 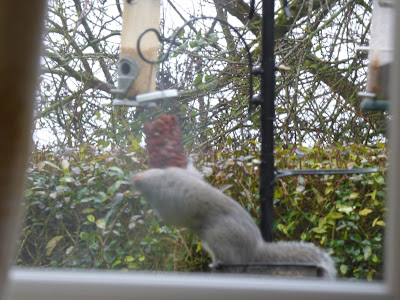 A squirrel-proof feeder has been ordered!

When I go and fetch wood from the shed I always look to see if there are any more owl pellets and for weeks there was a new one everyday. That means the Barn Owl was roosting in there every night. But none this week, hope I haven't frightened it away by moving all the kindling sticks around, perhaps he'll be back if the weather turns colder.