It's almost a year since I last ordered from Approved Food, I look but rarely see anything that's a good bargain and they do sell an awful lot of food that belongs in the JUNK section of the accounts. Then last week they had cheap flour, plain and self-raising plus brown sugar and kitchen roll which we use for tissues. I happened to pop in a Mars selection box for 50p too - took me right back to childhood Christmases - there was always a selection box of chocolate from someone.
Also splashed out £2 of one of their Mystery Boxes. Last time I got one - many years ago - it was full of weird things that I wouldn't use and I ended up giving most of them to youngest daughter.This time £2 bought these. 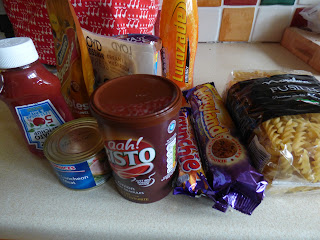 10 things so 20p each and all use-able, some slightly junk, not things I would usually buy - except the tomato sauce and the pasta (although I buy Basics brand rather than posh Napolina) but edible and ringing the changes occasionally is good.
I did make one mistake costing 59p - got this, didn't realise pinhead oatmeal was so different to porridge oats. I rarely eat porridge, for some reason it never seems very filling to me and hadn't had any in the cupboard for a while, but thought it was time to try it again. 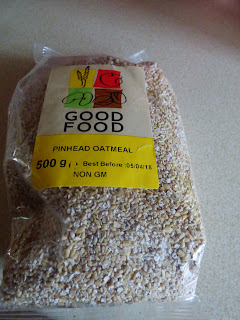 Anyway I have this now so will give it a go, it just needs soaking over night in water. I'm not planning to follow one recipe I found for pinhead oatmeal porridge which involved adding double cream!

Counting everything in the whole order individually there were 78 different things. Delivery is £5.99, that means *brain whirring* 7 and a bit pence to add to each thing. Did I save money - yes a little. Never as much as it looks at first glance, and not as much as the £46.55p quoted on the receipt, but at least I don't have to buy any flour, brown sugar or kitchen roll for the rest of the year.

Just remembered a post I did all about Approved Foods Waaaaaay back in 2013 when my first blog was a baby which is HERE if you are curious.


Thank you for all the comments on Wassailing and Hello and welcome to a new follower.

I went over to visit small grand-daughter yesterday, in 12 days she has gone from one or two steps to walking really well. Got over to Leiston by a roundabout route after finding a big yellow sign......."Framlingham Town Centre Roads Closed". When a B road is closed the signed Alternative Route has to be by roads not smaller than a B road so I should have gone miles out of the way to get round, luckily I nipped through some small back roads so didn't have to go so far. There are many road repairs going on in Suffolk at the moment  that it's getting really common to suddenly find a road closed. Very glad to have lived here long enough to know my way round without a map (or a sat nav) Must be awful for newcomers.

Wassailing was done...........As dusk fell I went outside and draped bread soaked in apple juice on the apple trees and poured a bit on the roots, chanted the rhyme and patted the trees to give them some encouragement. Didn't bother with the air rifle or banging pots and pans! Might have frightened the neighbours.

What a chilly day it was yesterday and forecasting even stronger winds but thankfully no snow this far south and east. The squirrel proof feeder did NOT arrive .....  Col's fault!  for ordering cheap stuff off ebay .....left it to him to sort out on the lap top in hospital.

TODAY ...Editing in to say.....................Oh my goodness, how windy is this weather! I got up at 6am when the electric kept going on and off. Can  I can hear tiles sliding around? I hope not. Power still on at the moment  think  I'll wait a while to hear if any roads are blocked by trees or overturned trucks before going anywhere. This is when Local Radio really comes into it's own as people ring in with information.

Hope you are all safe

Posted by Sue in Suffolk at 06:00
Email ThisBlogThis!Share to TwitterShare to FacebookShare to Pinterest
Labels: Approved Food, Preparedness