When we had the LPG  range fitted here a year ago and all the pipework done we had 19kg cylinders rather than the 47Kg. Mainly because we knew Col was going to be out of action and there is no way I can shift a 47Kg cylinder and get a new one in place. Whereas an empty 19Kg is easy to lift into the car and I can lift a full one out too. BUT they do seem to run out quite quickly ..........well they would .....being a third the size of what we are used to!

The cylinders are linked through a switch over valve, which automatically starts using the other cylinder when one is empty and has a dial that goes red so you know when to change the empty one. Much better than our first years at the smallholding when the one cylinder would often run out in the middle of cooking without me knowing. Now switch over valves are compulsory as is having the tanks chained to the wall.

Anyway, the other day when I swapped the empty cylinder for a full one (we have three - two fixed up and a spare to swap in) I came in to look at the accounts book to see when we last bought one. It didn't seem very long ago. I found we had the original 2 in the middle of April for which we paid the fitter £60- he did them cheaper. Then we were given one about ¾ full from my sister when they moved house and bought one in November for £37. And at the moment we have 2 full ( well apart from one weeks use)Can that be right? Maybe I missed writing one down, though I can only remember buying one.

How can I cut down on use of gas? Perhaps by using hints from the past, from the WWII leaflet called "Save Fuel; Fuel's more precious than jewels" which is one of many period leaflets that make up this little book.
. 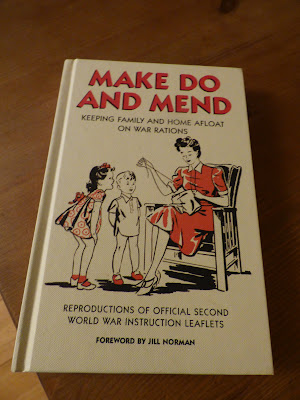 The book says   Cooking for Victory means Cooking with Economy

Did you know it takes 15% less gas to bring food to the boil in a covered saucepan?
So use a lid ✔ Yes I do that

Plan meals so that you fill your oven
I Try, it doesn't always work ❌  Must try harder

A gas grill uses a lot more gas than frying
So fry on low heat with very little fat  before raising temperature ✔ Yes rarely use grill.

And Finally
Most Important.........If just one home gave up toast for a year it would mean 2,000 extra bullets for the war effort !!

They knew how to make you feel guilty back then!

Oh and BTW that pie on yesterdays post needs  20 minutes on Gas 6 and 30 mins on Gas 4. Although the original recipe is for something much bigger using 500g of sausage meat, lots more bacon and 4 eggs . So I think I adjusted the cooking time down a bit - but not much.

And for everyone trying to see book titles on my little shelf...........voila! 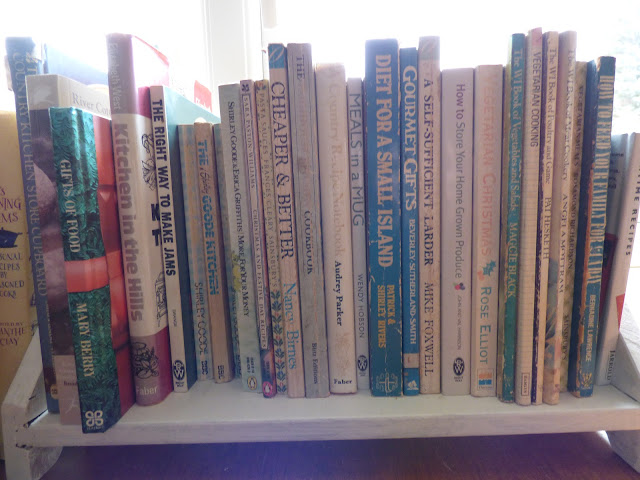 Some very old books here and not a celebrity in sight!
Plus the only other recipe books I possess after clearing out lots when we moved twice. 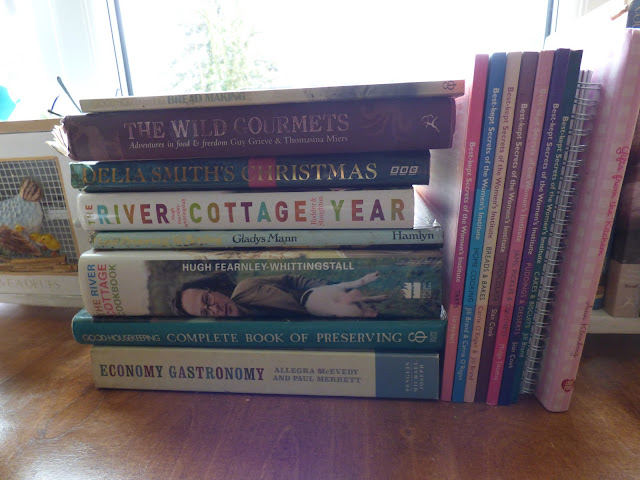 Some of these could go too but Ziffit doesn't want them.

Most of the recipes I actually use are in poly-pockets in a very fat ring binder file thing. I tend to photo copy from borrowed recipe books or tear them out of the supermarkets free magazines.

Thank you for all yesterdays comments


Posted by Sue in Suffolk at 06:00
Email ThisBlogThis!Share to TwitterShare to FacebookShare to Pinterest
Labels: Thrifty Lifestyle