Monday
I found 2lb of last years strawberries in the freezer and Brother-in-law brought more from his garden at the weekend (and I have enough of my own to have some everyday for a few more days) so I made some strawberry jam, chucked in the half pound of gooseberries that were all I rescued from the 2 new gooseberry bushes (ruined by ants I think) to help it set and a packet of pectin too, just to be sure. I don't eat much jam, brother-in-law is now diabetic so can't eat it - I'll take some with me when I go anywhere and give it all away.

Then swimming. 4 lengths straight off (it's a small pool so that's only 80 metres!) and then about another 15 lengths with rests quite often. The 32 lengths without stopping I used to do years ago will be 40 lengths here and a long time away I think.

Home again and the first thing I noticed at the end of the lane was some cardboard boxes and a bin bag near the workshop door. "Surely not fly-tipping right up here!" was my first thought and then saw they were full of wood-off cuts, some bits my sister and BIL didn't want to store for winter. They were quickly chucked on the massive heap in the wood-shed. Winter alone but warm!

Time for lunch and the week of Queens Club Tennis started at 1pm on BBC2. The signal for me to get out some  cross-stitch and settle down to watch.

England Football in the evening. Whoop! they played until the end and won.

Tuesday -
A drive from Mid Suffolk to near the coast to see youngest and Florence. Took strawberries and jam. We had a walk round the charity shops. Lots of shops closing or moving in Leiston. The town needs Sizewell C Power Station to be built but from the health and safety point of view the people don't need it. Youngest said the last Building Society in the town - which closed a year ago will be opening as a charity shop soon. Just Barclays Bank left for all the businesses to use.
I had a Co-op voucher for Subway BOGOF so we had one each for lunch. I don't really get Subway.............it's just  a bread roll with a choose-you-own filling! but almost every Co-op in Suffolk has a Subway concession in it now, so perhaps it's a way to keep the East of England Co-ops running and young people seem to like them. (That makes me sound old!)

Home and a card through the door "We tried to deliver a parcel, you can collect from Debenham Post Office" - Bother, just drove through there on the way home.

Sat out in the sun and read for a while then it clouded up so in to watch tennis. Andy Murray back after a year off for hip surgery. He looked good for two sets but faded at the end. Britain's new number one - Kyle Edmund won his match, he has come on well over the last two years.

Wednesday
Decided to have a fight with the front path. The slabs are two feet wide but the grass had overgrown them so much that there was only a few inches of slab to be seen in places. Didn't take too long with the lawn edger spade and a bit of tugging to clear the path. One slab was a bit on the huh (as we say in Suffolk) potential "Trip Hazard", so I levered it up with a draining shovel  (the only bit of school physics that has come in useful in life was learning about levers!) and found big roots of something underneath, got rid of them and it still wasn't flat, repeat two or three times until it's level but a bit rocky. Oh well - best I can do, at least there's nothing for the postman to trip over.

Afternoon to the dreaded dentist, for a big filling to rebuild the tooth that broke. It might not work for long and I've still got toothache from the filling he did a month ago although he said it looked OK, I may have to go back for a root canal thing on it if it doesn't stop aching. Oh Joy Unbounded!

Picked up the parcel - it's a fly screen for the back door, made of chains but I seem to have bought industrial quality as it weighs a ton so I'm going to need help with the fixings -Bother. I need to master the art of using a drill, I'm OK with using it as a screwdriver but never got the chance to try drilling holes.

Thursday
Longest day or to be precise longest daylight hours. Forgot to do a Summer Solstice post - must remember - Next Year.
Absolutely Freezing cold North wind this morning. Had to get out of bed and pull in the windows during the night. It doesn't seem like June at all, I put a hat on when I went out early to fill the bird feeders - woolly hat in June - ridiculous!
At home all day, the on and off toothache was worse, probably aggravated due to the scale and polish he did, at least I hope that's the reason. 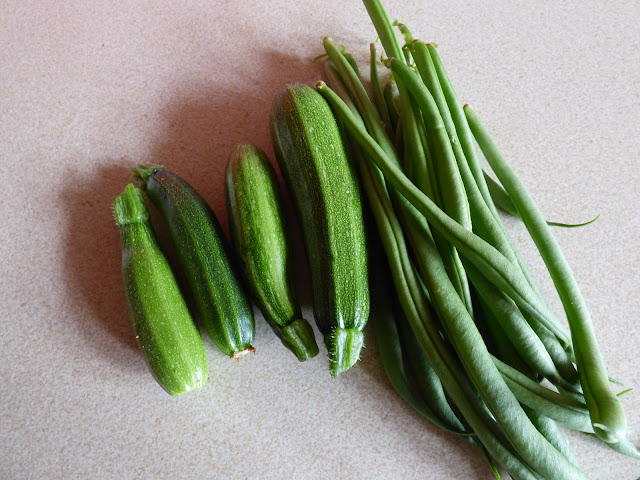 First French climbing beans and  courgettes. It's always best to cut the first courgettes when they are very small as that helps the plant to grow stronger - same with cucumbers, in fact I always pinch off the very tiny cucs when they first appear and don't let any grow to full size until the plant has really got going. Although saying that, I have 3 plants this year so did the above with 2 but let the third keep going with it's first fruit.

I needed CAKE! Preferably with cream and the new strawberry jam so made a mini sponge as I only had 2 eggs left.

Rang to check the work in bathroom will start next week....... taking out bath to replace with shower. That's the first part. Then they'll take the grotty shower out of the bedroom and I'll see what's underneath it. May need new carpet, may put a small bath in the bedroom instead, might not!

Rang a local man who advertises in the Parish Magazine to get him to come  for ideas and quote for new kitchen units.They are 1970's or 80's mock wood, kick boards missing, a draw front missing and generally old and tired.

Tennis again, Oh dear Kyle Edmund knocked out by the same bloke who knocked out Andy M. The commentators keep saying how entertaining Australian Nick Kyrgios  is but although he played brilliantly today with loads of un-returnable first serves, I find his on-court antics a bit childish and his swearing isn't necessary either, and I know that's sounds like I'm too prim and proper but I really don't understand the need for constant efffffing!


Friday
First cucumber and last of the strawberries - due to lack of rain the plants have flagged. It's too far down the garden to water them and with a water meter I'm wary of using the hosepipe too often. 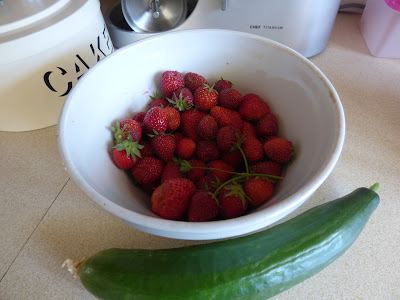 Out shopping to Stowmarket. Quite quiet in town for a Friday morning..........except in the bank........always a long queue there. Bought myself a new pair of shorts AND trousers in M&Co - a very, very rare event. Some of my shorts are so old they are falling apart- despite mending. Now I can ditch the worst and I needed a pair of lightweight trousers, now that I'm out at things like WI in the summer months.

A gloriously sunny afternoon but the wind from the North is keeping temperatures down here so no good for sitting out ............. Tennis on TV instead  and Nick Kyrgios again,( serving aces like crazy and not so much mucking about) and more stitching but with so much time fiddling about on the blog it's not growing very quickly .................."it" being a Christmas card for a small person.


So that's another week  gone, and that's what I did to fill my time, sometimes I feel I'm still waiting for Col to come home other times I'm OK........mostly OK.

Many thanks to everyone who clicked the follower button. I'm so easily made happy by seeing the numbers go up! and thanks for comments too.

Back Monday - Have a Good Weekend.