These make me think of that word, used in a derogatory way for women in the past, but perfect for my peonies. 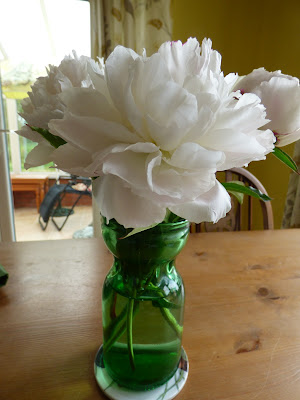 They lasted well inside and out this year

Next door neighbour asked if I needed anything doing in the garden, I said just strimming the edges so he came round with an electric  strimmer and I found an extension lead and he went quite a way round the garden doing the tatty bits that I can't get with either big or little mower. The trouble is I'm not used to relying on someone else to do something. Our way of life had been so self-sufficient for nearly 40 years but I can't work the huge petrol pull-start strimmer (I think they have a different name in the States so readers there might not know what I'm wittering on about!) so either I have to give in gracefully or get something I can use myself.

In other news........car was serviced and passed it's MOT ....good.It needed a couple of new bits on the suspension and new brake pipe and a new tyre - I await the bill! I know I'm not getting ripped off as the people who own and work at the garage are friends of Brother in Law.

I'm eating strawberries from the garden - a handful everyday at the moment, lettuces too. Leeks have been planted out and the French climbing beans are heading up the canes. Not too many jobs left to do apart from weeding, successional salad sowing, planting out runner beans and then harvesting all the goodies.......raspberries are looking very good but we need rain for them - most of it has missed us

Still dealing with officialdom regarding money stuff.......... phone calls, forms and letters. I think I've sorted something then get a letter wanting another bit of information. I expect it will all get organised in the end.

Went to Big WI, we had a speaker talking about wool felting. There is conflicting history of how someone found that wool would knit itself together if wetted, heated and bashed about. She had some lovely books and had travelled to Turkey and countries in Asia to find out more about a craft that dates back at least 4,000 years. She had made all sorts of interesting colourful things, but it's not a craft I would ever have the patience to try.

(Edited in later to say.......I've just done what I should have done earlier and looked this word up in the Shorter Oxford English Dictionary.......seems it doesn't exist in the way I thought! Just means like a blouse? There is another word from the 1500's.....Blowze which means "A Wench" or "Slatternly".
So where did I get my word from? No idea!)


Back Tomorrow
Sue
Posted by Sue in Suffolk at 06:00
Email ThisBlogThis!Share to TwitterShare to FacebookShare to Pinterest
Labels: The Garden