Son and DIL moved to this village in February and it's a village I know well having spent many evenings here either at youth club or hanging around in the bus shelter - as you do - aged 14!

I drove over so we could walk around the Open Gardens, many tucked away behind houses and not often seen.There were 14 gardens open and Willow slept her way around 9 so after 10 we went home for her feed. 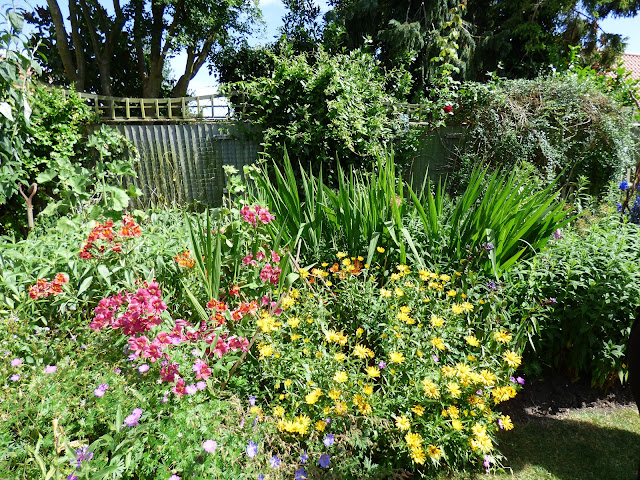 Garden behind one of the Big Houses of the village 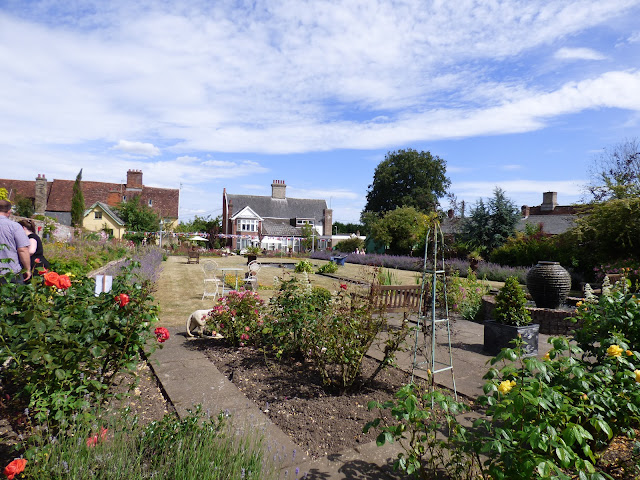 Lovely little pond in another garden 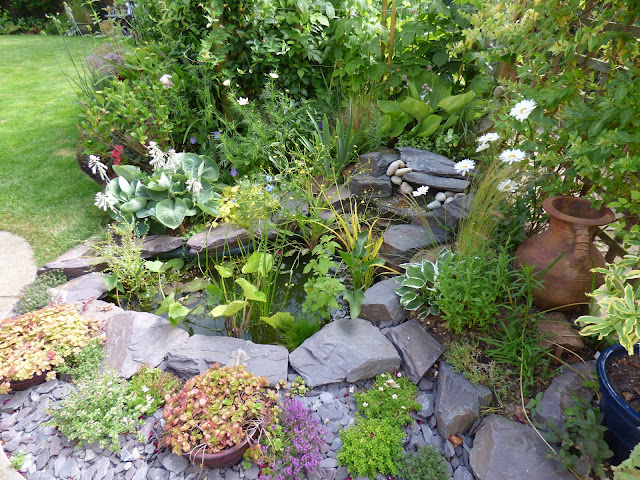 Son asked about this porch on the front of a house, (sorry I had sunglasses on so didn't realise I'd caught the sun in the photo) 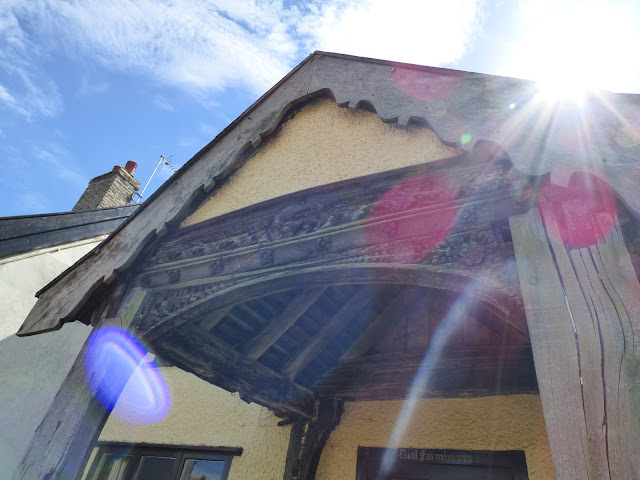 it has very old carvings and the owner said the story is that it came to this house in the 18th century when a manor house in nearby village of Westhorpe  was destroyed. Looking online for more details of the history of Westhorpe Hall I found the following.

Westhorpe Hall was a manor house in Westhorpe, Suffolk, England.
Westhorpe Hall was the residence of Charles Brandon, 1st Duke of Suffolk and of Princess Mary Tudor (daughter of King Henry VII and sister of King Henry VIII), a love match and second marriage for Mary and third marriage for Charles. He was previously married to the wealthy widow Margaret Neville, and then Anne Browne, mother to Charles's two eldest daughters, Anne Brandon and Mary Brandon. There, they raised their children, Frances (mother of Lady Jane Grey), Eleanor, and Henry Brandon, 1st Earl of Lincoln. Princess Mary Tudor died at Westhorpe Hall where her body was embalmed and held in state for three weeks.[1]
When the house was being demolished in the late 1760s, the site was visited by the antiquarian Thomas Martin of Palgrave:

"I went to see the dismal ruins of Westhorpe Hall, formerly the seat of Charles Brandon, Duke of Suffolk. The workmen are now pulling it down as fast as may be, in a very careless and injudicious manner. The coping bricks, battlements and many other ornamental pieces, are made of earth, and burnt hard, as fresh as when first built. They might, with care, have been taken down whole, but all the fine chimnies, and ornaments were pulled down with ropes, and crushed to pieces in a most shameful manner. There was a monstrous figure of Hercules sitting cross legged with his club, and a lion beside him, but all shattered in pieces. The painted glass is likely to share the same fate. The timber is fresh and sound, and the building, which was very lofty, stood as when it was first built. It is a pity that care is not taken to preserve some few of our ancient fabrics."[2]

So maybe this little bit was rescued and brought the 5 miles to Haughley to add to the front of this ordinary house in the street and who knows how many Lord, Ladies or Queens have walked through it!

On our way round we managed to call in at the village hall where the WI were serving tea and huge slices of chocolate cake or scones and jam, and very nice it was too.

I forgot to take a photo of sleeping Willow on Saturday but  managed to snap Florence with her Daddy when the family called in for a quick visit. She just Loves books, preferably 2 or 3 at a time, she likes  turning the pages and looking for dogs, cats, ducks or babies. Always plenty to look at in these lovely Shirley Hughes books which her Mummy liked too all those years ago. 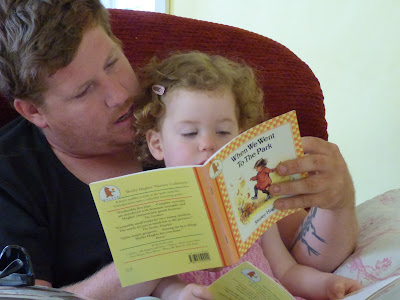 This post was going to finish here, but then I got sidetracked into googling Shirley Hughes, she's still alive - aged 90! She has written and illustrated more than 50 books which have  sold 11.5 million copies - Amazing. As well as that she has also illustrated many books by other authors.


I can't think  how it happened (!) but I seem to have pre-ordered a new book coming out in October, 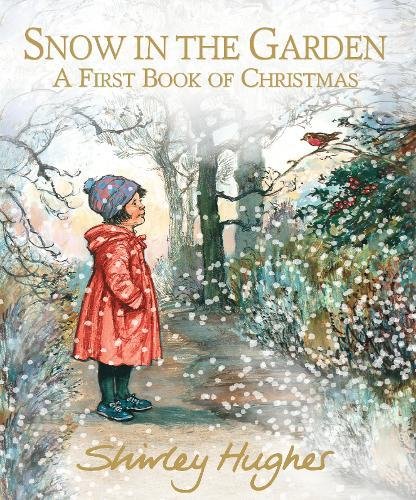 Back Tomorrow
Sue
PS
Thank you to everyone for all the interesting and lovely comments on Saturday's post, apologies for not replying to them all. Also Many Many Thanks to everyone who clicked the follower button and made the numbers go up and up. Big welcome to you all. Margaret asked why be a follower and what being a follower means and why is it important? And I have to say  it isn't important at all and I have no idea what it means apart from it showing up when someone goes into a profile.
But I get childishly excited by seeing the numbers creep up.......

Posted by Sue in Suffolk at 07:10
Email ThisBlogThis!Share to TwitterShare to FacebookShare to Pinterest
Labels: Local Events