Look What I Spotted

Friends came to visit and I was showing them the disaster that is the Alstroemeria quarter of the Cutting Garden when I spotted something, right by the wire netting fence.

Here is what it says on Wiki............
In the UK, it has a distinct southeastern preference, being more common in England. Recently it has been found in the southwest of England in Butleigh near Glastonbury in Somerset; whereas it is only to be found in coastal regions of Wales as well as the Hodbarrow Nature Reserve in Millom, Cumbria,[13] and some parts of Northern Ireland. It is relatively common in the northeast of England and in recent years large numbers have appeared in the grass verges surrounding the Metro Centre in Gateshead.[14] In Scotland, it was thought to be extinct, but was rediscovered in Ayrshire in 2003. In some countries the plants have protected status. They are unusual in that in some years they appear in great numbers, then sometimes only reappear after an absence of many years.

The Bee Orchid is a sneaky mimic - the flower’s velvety lip looks like a female bee. Males fly in to try to mate with it and end up pollinating the flower. Sadly, the right bee species doesn’t live here, so this orchid is self-pollinated in the UK 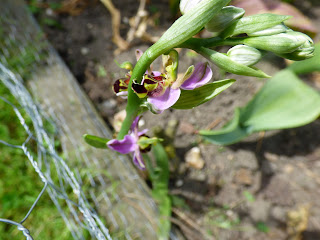 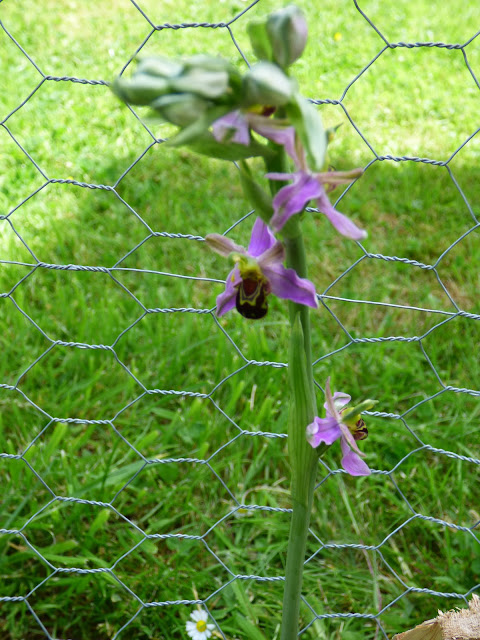 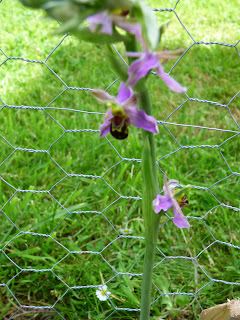 
How can I encourage bee orchids to stay in the garden?


Bee orchids can be really unpredictable and may disappear from an area where they have been flowering successfully. They are usually found where there is drained base rich soil in areas such as scrubland, coastal sand dunes, chalk grassland and occasionally un-mown lawns.

It is best to leave an area of bare ground for the seeds to settle on as this is a colonising plant, however only those seeds which gain nutrients from fungal hyphae will begin to develop. Cutting should be avoided.

It sounds as if I may never see another

But the Pyramidal Orchids are back on the meadow again, there are even more than last year so they must be here to stay. 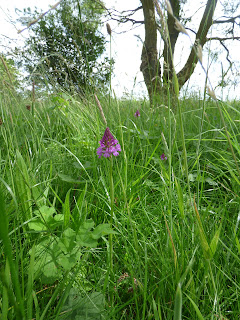 
Posted by Sue in Suffolk at 06:00
Email ThisBlogThis!Share to TwitterShare to FacebookShare to Pinterest
Labels: Natural world