Last Saturday I mentioned that it was knowing our sugar is a locally produced food that gave me the idea for the (sort-of) challenge and this was the other nudge ................... I found these cuttings as I sorted out a folder full of my old Penny Pincher letters that was falling apart.

The first is a comparison of prices between supermarket and farmers market, I didn't believe it then - about 15 years ago- and its even more unlikely now.
The pages come from the NFU (National Farmers Union) magazine I think and show two baskets of produce costing almost the same. There are no farmers markets close to me and those a bit further away are just once a month........and expensive, but probably the price we SHOULD be paying..........compared to supermarkets - who bulk buy and push down the prices they pay to farmers. 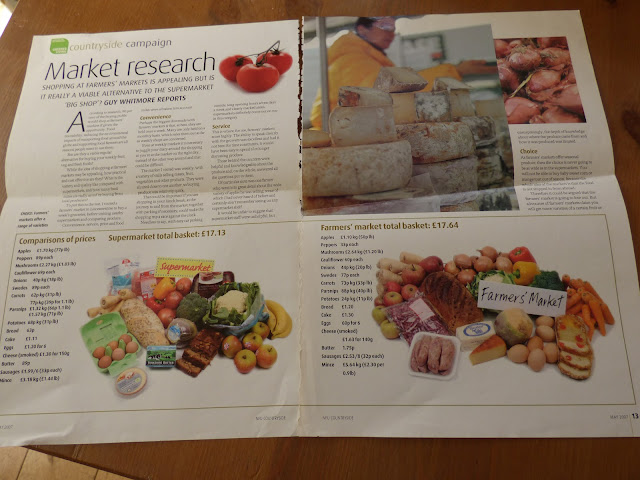 The second are pages from the East Anglian Daily Times - also from many many years ago when they ran a campaign called "Shop Local", and are comparing the miles food travels to reach our plates. Comparing supermarket to the authors local farm shop on the Suffolk/Norfolk Border. Over 13,000 miles for the basket on the left and 173 miles for the local produce. 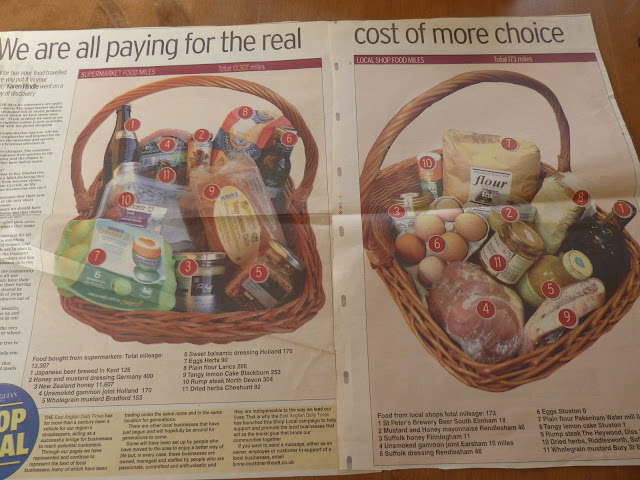 I thought it would be interesting to see if I could manage for a week with local produce from Suffolk mainly but adding Norfolk and Essex if necessary (plus spices from distant lands). I won't compare costs as I already know that local will be about double the price of supermarket for some things, which is why this will just be for one week!
Of course Summer or early Autumn would have been a more sensible time to eat local - more food from the garden. Eating local was something that was commonplace at the smallholding when we were mostly self-sufficient in fruit and vegetables. But Hey-Ho....I'll give it a go!

So I started at the Car Boot sale  with local apples from a private seller's own orchard - Eating Apples 8 for £1 and Cooking apples 5 for £1. Eggs are available from several farms withing a few miles and are £1 for half a dozen. 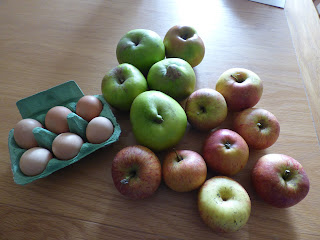 Posted by Sue in Suffolk at 06:00
Email ThisBlogThis!Share to TwitterShare to FacebookShare to Pinterest
Labels: 1 Week Eating Local, Growing Food