Thank you for comments yesterday. I'm posting the Eat Local posts retrospectively so the car boot where I got the apples was nearly two weeks ago and I'll soon be at the end of my week  (Does that make any sort of sense?) I did it like this to give me plenty of time for taking photos and uploading.

Except for tap water the things I've been drinking through the week aren't local. I could have bought very local Aspall Cyder or James White Apple or Beetroot Juice  and if it had been summer I might have done but I need hot drinks this time of the year and no coffee, tea or chocolate is grown locally! (Told you this was just  a sort-of challenge). So you are welcome to say I've cheated all week if you like!

I also had some home made cheese straws leftover from the Bonfire party to eat. They were not made using local produce but they could have been.

After the car boot sale (Yesterdays post) I called in at the Hog and Hen Farm Shop  on my way home, (it's a relatively new farm shop  about 4 miles from me), for some local basics...... Flour from Marriages in Chelmsford Essex for pastry and bread, butter and cheese from Suffolk Farmhouse Cheeses and the only really local veg they had..........kale from a nearby village.
I could have got milk there, also from Suffolk Farmhouse Cheeses  but had some started in the fridge - not local but I didn't want to waste it...that would be silly. Other things I had already in use will keep for a week. 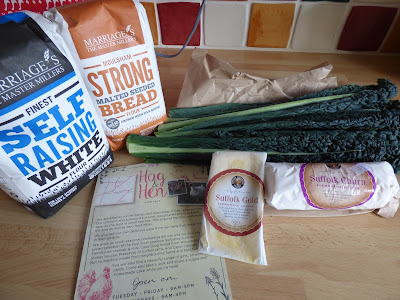 The breadmaker made me a loaf of bread and I realised the flour I'd picked up was seeded rather than multi grain.........how did I do that? so hope it doesn't disagree with me as some seeded things do.

So breakfasts have been simple......... home made toast and local honey.This jar and another already started have travelled  all the way from the village next to the smallholding and I've had them since we moved - so it's a good thing that honey doesn't go bad! and it's about time it was used up. 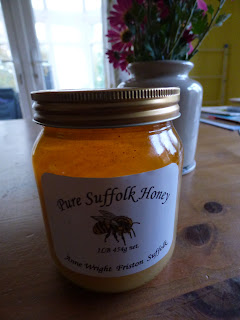 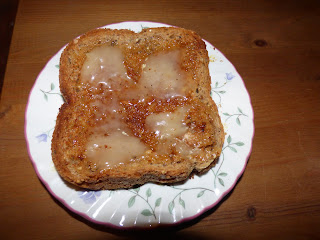 Dinner - Made a very small flan using the non-local milk, local flour,butter and eggs plus my own red pepper from the freezer and chard from the garden. Half of it eaten with my own frozen roast vegetables and some of the kale. 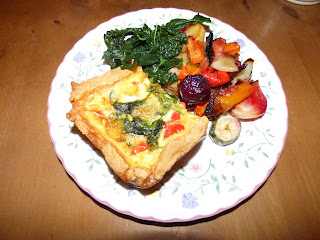 I  used 1 cooking apple to make 2 bun-tin sized small pies with the pastry trimmings from the quiche and had one for lunch and an eating apple with a piece of Suffolk Gold cheese.

Posted by Sue in Suffolk at 07:47
Email ThisBlogThis!Share to TwitterShare to FacebookShare to Pinterest
Labels: 1 Week Eating Local