November Financial Round Up

No-vember wasn't a no-spend month, it never is, but my Black Friday  spending just involved going to a fund raising coffee morning run by the Friends of The Doctors Surgery where  I bought coffee and cake, a book, some draw tickets and  more Christmas wrapping paper, exactly the same as some I got several weeks ago at a boot sale and also 50p. NOTE TO SELF....DO NOT BUY CHRISTMAS WRAPPING PAPER IN 2020!


A man at a car boot a few weeks ago had a huge box full of Christmas tree baubles etc for 10p each. Some new but most used, and I sorted through and got these for £1. Red and Gold for the Christmas tree this year I think. I hope the tree hasn't disintegrated any more after another year in boxes and bags in the cupboard. I'll be doing it early as the Surrey family are visiting Early December rather than at Christmas. 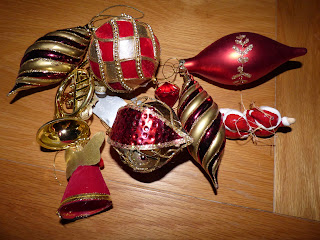 The only income was the usual County Council spouses pension, repayments from loans to family and bits of interest from savings, so savings were dipped into again......but still enough left to last me until state pension time in 2021 ............perhaps Labour will get into power and mysteriously find some money to pay us 1950s women what we've missed out on by goalposts moving ......... a few years of back paid state pension would be a nice chunk of money, but I think that's very unlikely.

Any Frugal bits?
I won a raffle prize (giant chocolate Kit Kat ) at WI and will wrap it up and use it for the raffle at the village over 60's Christmas lunch.
Still eating my own potatoes and frozen peppers plus leeks from the garden.
Made a batch of pastry cases to put in freezer ready for quiches or flans over Christmas etc.
Using bread-maker
Local and cheap apples from boot sale early in the month
Still catching the cold water before it gets hot enough for dish-washing.
Hung washing out  to half dry and then finished off in front of the fire in the evenings.
Finding half a tub of bird-feed fat balls for £1 at the table top saved me needing to send for bird feed this month.

STILL CLEARING OUT
The old rotovator from the workshop was bought and taken by the man who collected the mower for it's service.
Big bag of books to charity shop.
Cracked pudding basin and dented cake tin -out into bins

Nothing to do with anything else but it's always a surprise to look out of the bedroom window and see people, normally it's just wide open fields. 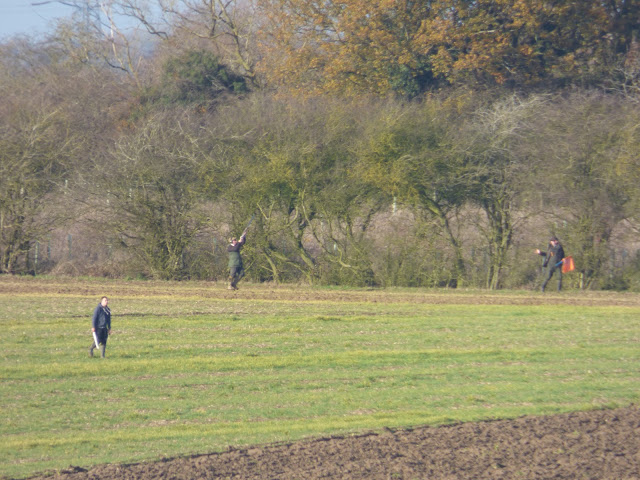 A real country scene of a pheasant shoot, two fields away. There's a hatchery and rearing pens down near the village and they would have released them at the beginning of Autumn. Any journey on the little roads around means avoiding pheasants as they wander about but however many are shot there still seems to be some around to pick up all the food that the small birds drop from the feeders.


Thanks to everyone for comments yesterday

Have a good weekend - I'm going to Coffee, Cakes and Carols at  chapel. meeting a fellow blogger  and must start Christmas stuff ready for the Surrey family visiting next weekend.


Posted by Sue in Suffolk at 07:00
Email ThisBlogThis!Share to TwitterShare to FacebookShare to Pinterest
Labels: Christmas, Frugal Month Notes