Car Boot Finds From a Month Ago

(I've just found there are 59 posts with the Car Boot Bargains Label!)

Anyway, sometime in October I spent £5.50 The apples were 50p - not the beautiful bowl - that's mine (second-hand from charity table top sale years ago).
2 more bits of Brio 10p...... The cross over tracks will be useful. Kilner jar £1 (thought I had plenty until I bought some different dried fruit and found they were all in use).
The candles are for the 2 hampers. I'll take them out of the box and wrap in a little bit of tissue - 50p.
Also bought with plans to make for the hampers was the soap making kit - that was £2.50.
Not sure why I bought the old jar, probably because I'd never seen one that size and shape before, I've got a few other old pots and jars and use them as vases - it was 50p
The birthday card and the clog were 20p each.
You might be wondering why the heck I've bought that very small pottery clog - there is method in my madness as it's ready to enter the Miniature Flower Arrangement at next years Bacton Show. Just have to think of where to put it so I don't lose it  until next August.

I didn't try the soap kit for a few weeks until I got the jug below from a boot sale at the end of October for 50p,(Plus More Christmas wrapping for £1.50 and the new jute bag was £1) 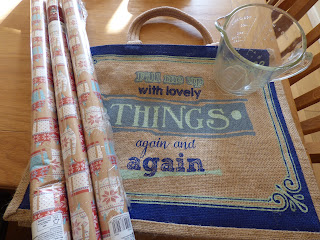 The jug was bought specially to make the soap from the kit in the first photo but I wish I'd not bothered.  The SMELL - YUCK and UGH. No way could I give the soap away - the whole thing went in the bin...........money wasted AGAIN!

But money saved at another boot sale. 5 Pairs Debenhams cotton knickers for £4 for me and a couple of little craft bits for 50p. They will go in the cupboard for when the grandchildren are older. 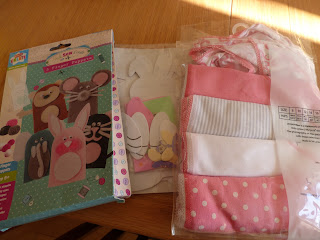