First of the Season

This time it's a few spears of delicious Asparagus. I'd been looking hopefully for them appearing for a couple of weeks and at last 5 spears big enough to eat. 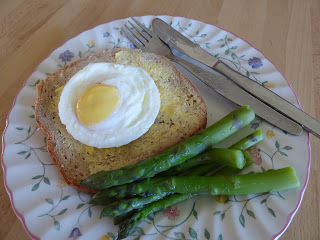 It's a bit of a 'Marmite' food you either loathe it or love it and  I love it especially as it arrives so early before any other fresh veg is available from the garden.

My 10 crowns were planted in our first year here but haven't done too well, the soil is too heavy for them and it was the same at the smallholding and now we never seem to get the rain at the right time either.

There could well be a shortage of asparagus in the shops this year as farmers haven't got enough people for the harvest, it's very labour intensive, usually cut and packed by people from Eastern Europe.  Many years ago a friend in the Smallholders Society took over a small field of asparagus, it was on the light sandy heath-land soil near the Suffolk coast but he gave up after just one crop with a bad back!
Heard on the radio that a big grower in Cambridgeshire is flying in 2 plane loads of people from Romania to help with all the veg that needs cutting/picking during the summer. There needs to be many more than two plane loads.

Apologies for not getting around to answering any comments yesterday.....Must try harder!
Back Tomorrow
Sue

Posted by Sue in Suffolk at 07:00
Email ThisBlogThis!Share to TwitterShare to FacebookShare to Pinterest
Labels: Asparagus, Growing Food