The Ogham Alphabet is the only native British writing system devised over 2,000 years ago and carved using notches onto wood or stone.
I had heard of this way of writing from the Sister Fidelma Books by Peter Tremayne -the first few of these I read years ago before they became very repetitive.
It was because of the book by Artist Karen Cater called 'Spirit of the Hare' which I found at a car boot sale last year that led me to her publishing company and details of another book 'Ogham Sketch Book - a Diary of Tree Lore'. I splashed out for a second-hand copy because it sounded fascinating and it is.

It turns out that in the Ogham Alphabet each letter is also a tree and a number and part of the calendar or actually the other way round..........each tree is a letter and number and a month or day of the year.
Karen set out to find, in her local area, each tree of the calendar, illustrate them all and find out more about the history, traditions and folklore surrounding the trees.

!!Brainwave!! I can't draw but I can take photos, there are lots of books about trees on my shelves and maybe I could fill a few blog posts in my efforts to do a post-a-day. So..........................starting now I'm going to try and track down the trees for each month beginning with the tree for the 5th Lunar month from April into May. Representing the letter S.
As the dates of a Lunar month would vary from year to year, the dates Karen used  are for the year she wrote the book. I'll do my tree posts roughly with a new moon and when I'm short of stuff to write about.

Below is her illustration for Willow, The letter S in Ogham is top left 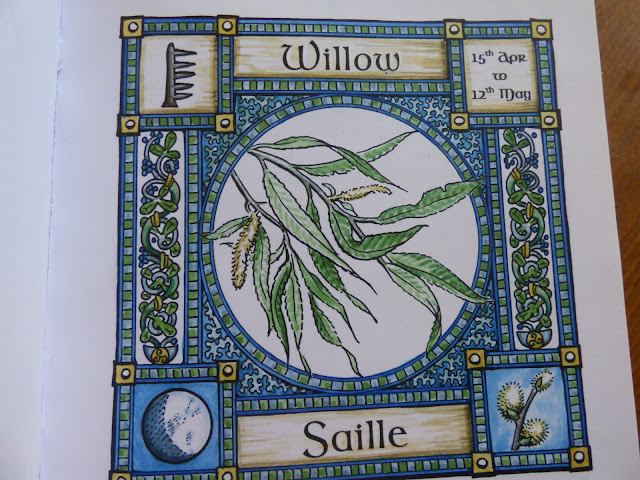 It was easy to find a Willow to photograph, there are several here - this is a Goat Willow growing just a few yards from my house.

This photo was taken a couple of weeks ago when the whole tree was covered in the fluffy catkins we call "Pussy Willows". The leaves are all out now. 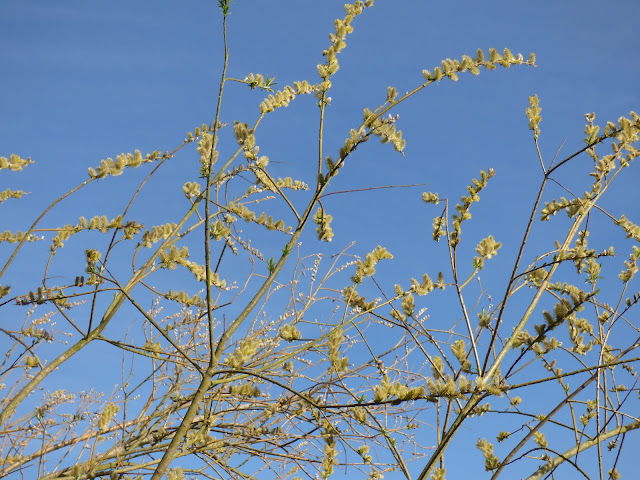 The Willow family includes White Willow, Crack Willow, Weeping Willow, Osier and the Goat Willow. All grow quickly, bear "pussywillow" catkins, can cross with each other and grow easily from twigs pushed in the ground, and that's how we planted many metres of hedges on the campsite at the smallholding.

I found this picture of Colin planting more on the campsite in March 2014. In the background you can see a willow hedge also planted from slips about 10 years earlier 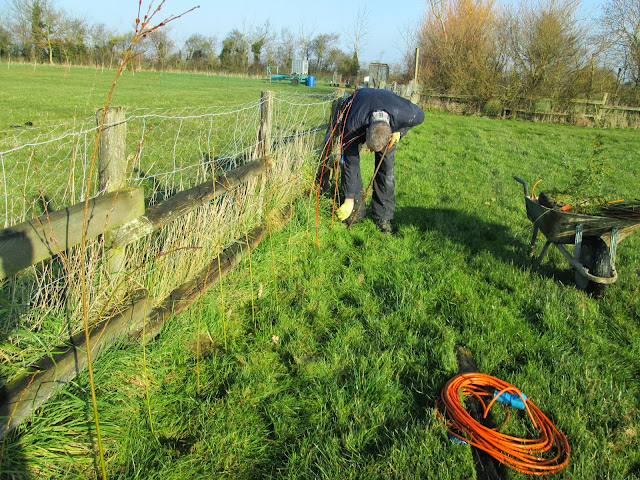 When looking for a photo of the willow hedge I also came across a bit I'd written about some of the people who were easily remembered from our years running the campsite
It made me smile to read again so I thought I'd share ...............

From my post in August 2013
The reason for mentioning campers I remember, is because the other day Gill at Frugal in Derbyshire had a picture of her Damson Tree on her blog and I commented that I had had a Know-it-all type camper here over bank holiday who had pointed to our Damson and said" Your Victoria Plum Tree looks as if they are ready ". I said " It's more of a damson type plum and they are still quite hard and solid as yet". He said " I'm sure it's a Victoria Plum as we have one near us at home". I wasn't going to argue so I just said Oh Right. There is no telling some people!
This Damson/Victoria discussion happened on the campers first day here, and I wasn't at all surprised when he came back to the door several times over the 5 days they were here. The first time he said "what's the best time to come to the door with enquiries?" I wasn't really sure what enquiries he meant as he had already asked me dozens of questions when he arrived. I don't mind answering questions about everything around but he didn't seem to listen to anything I said anyway!
This reminded me of some of the other odd things that have happened in our 20 years of owning a campsite.
There was the man who came running across the camp site to me in a panic when we were having the hay field cut many years ago. He was horrified we were having the field cut in case something flew up and hit his caravan. As he was several yards away from the hay field I didn't think there would be a problem. But he argued for several minutes that it was stupid of us to have the field cut when we had caravans on the adjoining bit.We planted a hedge between the two fields after that, just in case he ever came back!

Then the people whose car alarm went off early one morning and nothing they could do to stop it. It was so loud and the man didn't even know how to open the bonnet of the car. Very odd.

Years and years ago we had some people who would come every year to camp while they went sailing at Aldeburgh. But everyday there would be a line of huge knickers hanging up to dry. Did she really fall in that often and why did she have such huge knickers?

Several years ago, before we had electric hook ups, a small campervan pulled in to ask about the site. I spent several minutes answering questions about everything and then said it was £3 a night per person. Which was all we charged back then. The man said that was fine and started up to drive in but his wife suddenly shouted at him that £6 was FAR TOO MUCH and they would find somewhere cheaper. He gave me a look of despair and put the van into reverse to back out again, without saying another word, they had gone.

An elderly couple used to come regularly, but every time they came they would want to borrow a ladder or some tools for mending the caravan. Colin was a bit worried about this old boy going up a ladder so it always ended up with Col doing the job for them instead.

About 5 years ago I was in the shed milking the goats at about quarter to seven in the morning when I was amazed to hear two caravans pull in. They had booked but I wasn't expecting them THAT early. We had other caravans on site so I quietly explained where they could pitch and said I was surprised to see them that early. One of the men said they had come down from a site in Norfolk and wanted to avoid the traffic around Norwich. Whatever had the campers thought on the site in Norfolk when they packed up and went at about 4 o'clock? The trouble was they didn't just pitch and settle down quietly. They started putting up awnings, rattling all the poles and shouting across to each other. You should have seen their faces when I went out and told them to be quiet and have some consideration for other people. I'm sure they had never been told off before!

A while back someone came to the door and said they were a bit worried because a man on the campsite was trying to fly a kite. Now normally this wouldn't be a problem on a campsite but we have the Very High Voltage wires not far away so kite flying is a definite No, obvious to most people with a bit of common sense.  So I went out and explained that kite flying was really not sensible.He was another who seemed surprised to have someone tell him he couldn't do something. Eventually he agreed that it would be more sensible to take the kite down to the beach (only a few miles away). But as I walked away he and his wife started having a huge shouting match, with her saying "I told you not to" and him shouting back that he wouldn't be told what to do and then the son started yelling at them to stop fighting. I crept away quickly!

Just after I started blogging there was also the lady and the parcel, a saga that went on for several days. Some of it is HERE if you want to read it


Although reading this again made me smile it did me no good at all, as I had weird dreams about campsites all night!

Back Tomorrow
Sue
Posted by Sue in Suffolk at 07:00
Email ThisBlogThis!Share to TwitterShare to FacebookShare to Pinterest
Labels: Memories, Ogham Tree Alphabet