4 layers of cotton that was originally a basket liner, bag ties threaded in the top seam to make a nose clip and elastic around the ears, but that was painful so another piece of elastic round the head. It's very bodged but might work, certainly more coverage than one of the thin pleated surgical masks, although the advice is still not to wear masks for "day wear" outside. 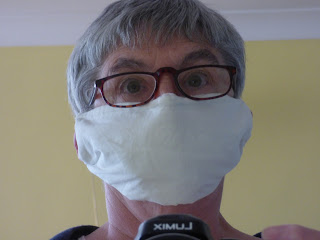 We did a family Zoom meeting on Sunday afternoon which was hilarious as the grandchildren kept disappearing, re-appearing and putting their faces right up against the cameras. Polly cat came to join in too, as she always does when she hears me talking to anyone. One positive outcome of the virus is getting more tec savvy! (Although more by luck than knowledge)

Have you been watching more TV than usual since lockdown?  I have, especially before the warm weather of last week.

I don't often watch TV in the mornings (except perhaps wet Sundays) - a habit that remains from many, many years ago when I was the "nasty Mum" who wouldn't let the children watch TV before school.
Lunch time is Bargain Hunt, where they rarely buy anything that makes a profit, even more so since introducing the rule when teams have to spend more than £75 on one of their three items.
The TV is definitely turned off after the local news as Doctors is one of the silliest soaps  -  for one thing the waiting room is always empty! I avoid all the other soaps too.

I like all quizzes and some game shows  and have been enjoying the repeats of House of Games. We used to watch Countdown everyday but it's not so much fun on your own - no one to listen when I say smugly " I've done it" to the numbers bit! (less good at the words).  Monday nights was 3-Quiz-Night until Only Connect finished and only one more week of University Challenge. I wonder what will happen for next year if they record it before the summer break.

There are more films on than usual but I'm not a huge film fan....although if they were to show any Kevin Costner films I'd probably turn on - unless it was Dancing With Wolves which I've seen loads of times but it makes me cry and I hate crying nowadays.

Then of course there has been the Coronavirus Update each day which I've usually watched, it's quite interesting to see MP's etc actually speaking normally as opposed to being interviewed by someone who interrupts them (Radio 4 Today Presenters I'm talking about you!) or shouting at each other in P.M's Question Time. The Q & A's from journalists gets a bit repetitive so the TV goes off then.

Friday night has been cheered up for the next few weeks with the return of Have I got News For You. I wondered how they would do a new series with all the social distancing stuff but all 4 of the team members plus the weeks guest host  are recording from home via one of the group broadcasting things. Paul Merton is his usual droll self and Ian Hislop as witty as ever. Always funny, cheers me up no end.

I started watching the first few series of Line of Duty which I didn't watch originally, on iplayer but discovered they are all a bit 'samey' if you watch one after another and I've been finding some strange programmes about Alaskan living on DMAX.

Sunday evening is always Countryfile - a programme that many proper farmers dismiss as rubbish but I like it and the the 5 day weather forecast is useful for deciding which days to do the washing.

I've been glad of the TV to keep me company but I'll be even more glad when I don't need it. And I'll really miss the tennis this summer.


Back Tomorrow
Sue
Posted by Sue in Suffolk at 07:00
Email ThisBlogThis!Share to TwitterShare to FacebookShare to Pinterest
Labels: STRANGE TIMES, TV