My second picking of tulips from my mini cutting garden, nearly all yellow this time, the next lot to open will  be all shades of pinks and purples. 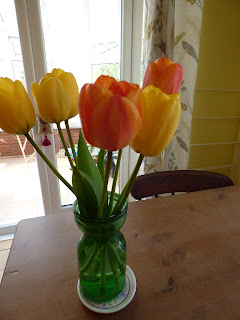 While I was collecting the nettles tops last week I found a magpie feather. I know it came from a  magpie because of the green blue shimmer. Last year a pair nested in the top of one of the Poplars on the field. 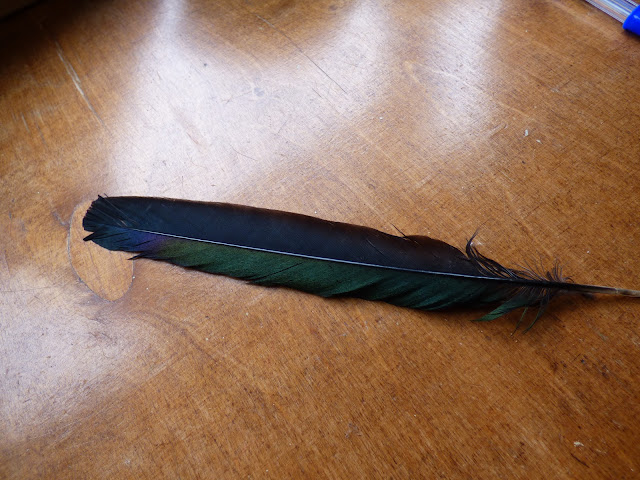 A few weeks back I heard a huge racket and saw a pair of magpies arguing with a pair of rooks over that old nest. I've not noticed any birds near it recently so maybe they all gave up.

(For readers from overseas this is a magpie!)

Magpies are large striking looking birds, unmistakable in their black(with shimmery blue/green tinge) and white and now SO common. It was rare to see them when I was a child and so unlucky to see just one. Now wherever you drive in the countryside there they are.


"For anglers in spring it is always unlucky to see single magpies; but two may always be regarded as a favourable omen. And the reason is, that in cold and stormy weather one magpie alone leaves the nest in search of food,while the other one remains sitting with the eggs or young ones; but when two go out together it is mild and warm and favourable for fishing."

What I also keep hearing and then seeing down the meadow, but only as they fly away, is a pair of Green Woodpeckers, they are very shy birds,could they be nesting somewhere close? None of the trees down the meadow are old enough to have holes in them for woodpecker nests.

Still seeing the goldfinches and long-tailed tits on the feeders, like the header picture, and a couple of starlings have found the suet block - don't see many here .

On Monday I noticed a few of the early potatoes were just showing through so needed a little soil pulling over them and as I did this all along the edge of bed were ants..... as usual. I've puffed them all with Nippon ant killer but only have a little left. Last year I got some Dof ant powder cheap from a boot-sale which turned out to be useless. With no garden centres open I've ordered online some of the decent stuff. Ants do more damage here, especially to the potatoes, than anything else- and they are bound to appear in the kitchen in June, coming  out of the old chimney bricks so I expect this will be my 4th June hoovering up flying ants.

I was supposed to be doing posts about Saints and their days from my book, but they've not been very interesting to write about!
However, today's Saint is Fulbert of Chartres. Fulbert was born in the mid C10 and was a clever child sent to study at Rheims and later taken to Rome where he became chancellor of the cathedral of Chartres where scholars came from all over Europe to study. He died in 1029 and the steeple of the cathedral is the only part that remains from his time when he rebuilt the cathedral after a fire.
And the next two? April 11th Saint Guthlac and April 12th Saint Zeno of Verona.  Not very well known.