On Monday night  Small WI had a Zoom  'meeting'. Ruth the President had tried to get the speaker to do her presentation over the airwaves but that hadn't worked - poor connection - so instead 8 of us switched on and chatted for a while about the Strange Times.....it seems we are all getting through.  I was the only one to have gone crazy with the hair clippers! everyone else was either snipping fringes or putting up with their wayward locks.

The answer to the question asked on Monday............are fish and chip shops open? is NO - at least not the nearest one to the doctors/pharmacy in a nearby village. Oh well, something else to look forward to in a few weeks or months time or - heaven forbid - a year!.....that worries me, my grandchildren will have forgotten who I am.

I've sown more seeds, watered several times and done some weeding and at last my ride-on mower was collected, repaired and returned again so the long bits that I hadn't got done with the little battery mower are now looking better.
And my pepper plants arrived from Thompson and Morgan.   The email saying they had been dispatched appeared on Thursday of the week before last but the plants didn't arrive until yesterday. Knowing what poor specimens of tomato plants Joy had received from them I was beginning to get a bit worried but they look fine and have been potted into small pots to grow a good root system before moving them into their big pots on the greenhouse workbench. Added to the one I managed to grow  I will have peppers ......... better say 'fingers crossed' I suppose. 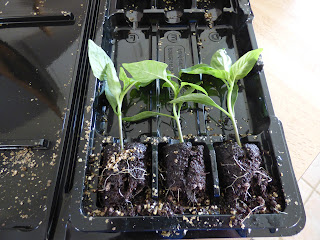 The wind disappeared on Thursday and I sat out for a while hoping to see Swallows or Housemartins,  Son - the archaeologist - who is back at work at the moment not many miles from me, has seen them as have so many bloggers. But here.............nothing!

So I sat out a while on Friday too and AT LAST some Housemartins checking out their last years nest. I do hope they move back in even though they leave such a mess on the conservatory roof which I can do nothing about.

Have a good weekend
Back Monday
Sue
Posted by Sue in Suffolk at 07:41
Email ThisBlogThis!Share to TwitterShare to FacebookShare to Pinterest
Labels: Being Grateful, STRANGE TIMES