These were the books collected in March from the library van, before the world stood still. 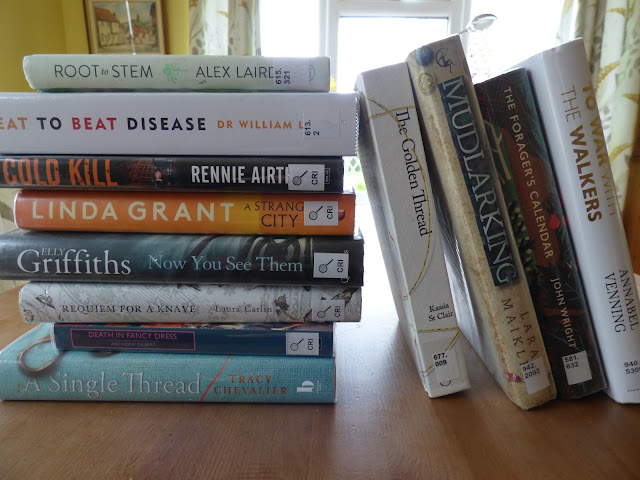 I had to give up on 5, three I couldn't get into (Cold Kill, Requiem for a Knave, Death in Fancy Dress) one had teeny print (The Golden Thread), one just didn't get going (To War with the Walkers)

Or maybe it was just my mood!

"Root to Stem" and "A Foragers Calendar" are similar books of what edibles to look out for in the wild. Both are OK but I wouldn't buy them.

As all these books will sit here for weeks, waiting for libraries to re-open, I could always try again if things get desperate .............which is very unlikely given the number of books on my shelves that are much more interesting.

Tracy Chevalier  - A Single Thread. Fiction. As always with this author fiction is woven around fact. In this case it is the women who embroidered (what we now call tapestry) the kneelers and cushions for Winchester Cathedral in the 1930's. Violet has moved from Southampton to work in Winchester mainly to get away from her mother and memories of her brother and fiance both killed in the war. One day she comes across the Broderers, women from all sorts of backgrounds working the patterns designed by Louisa Pesel. The kneelers and cushions can still be seen in the Cathedral (wish I'd known this when we went there for Son's Graduation Ceremony so many years ago).
A very good story which I really enjoyed.


D.E. Stevenson - Mrs Tim Flies Home. Fiction from 1952. This is the final book featuring D.E.Stevenson's alter-ego Hester Christie. Hester has spent 18 months in Kenya where her Army Officer husband has been stationed and now comes home for the summer, renting a house where her children can join her for their summer holidays from school and university. Another gentle happy story that I enjoyed.

Emma Smith - No Way of Telling. Children's Fiction. I'm not sure where I saw this book mentioned, but as it was by an author I read before with her biographies 'The Maidens Trip' about her time working on canal boats during WWII and 'As Green as Grass' also about her life before and after the war,  I must have decided on a 1p purchase
This is a story of a girl and her granny in Wales during a spell of harsh winter weather when a stranger appears and then vanishes. This tale of living in a remote place and the effects of heavy snowfall are beautifully described.
It's good to read a children's book now and again.

Edward Marston - The Mad Courtesan. Over the last 15 years I've gradually collected all this series written by this prolific author through the 1980's and 90's. Featuring Nicholas Bracewell who is a Stage Manager (Book Holder) with Lord Westfields Men - a group of actors in Elizabethan London. The stories are all very similar but as I only read one now and again it doesn't matter.

On what would have been library van day last week, Andrew the driver rang me (and everyone else) to make sure we were all OK and to say there would be no overdue charges. Quite nice to have a chat as we do every 4 weeks, although he is quite hard work as he has no sense of humour but he knows I used to work on library vans myself umpteen years ago so I know how things work.

Just as I'd finished talking to him the girl who was running the OneSuffolk weight loss group also rang to check I was OK and to say that all being well a new 12 week course would start in September and I would be able to join that - although would have to start from the beginning again.
It would be useful if I could keep off the 7lb weight that I lost in the first 4 weeks of the course! But with Simnel Cake, Hot Cross Buns and an Easter Egg to eat that may be difficult.

Posted by Sue in Suffolk at 07:00
Email ThisBlogThis!Share to TwitterShare to FacebookShare to Pinterest
Labels: Book Reviews, My Books