A Little Bit of Stitching 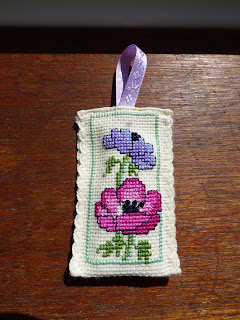 More cross stitch has been done in the last 3 weeks
than in the last 3 years!
Which didn't take much doing as I'd not stitched for ages.

This is the latest make - just a little lavender sachet using some Aida band which can also be used for bookmarks and to make cake bands.

I bought a couple of metres of this umpteen years ago and still have enough left for a few more sachets, and a small bit of calico left to make the pouches that hold the dried lavender inside the Aida. But I don't have much dried lavender so must remember to dry some more of my own this summer.


What next? I need some more birthday cards for men, so had a search though my box of charts. I have a box file full of charts mostly pulled from cross stitch magazines years ago and saved from kits bought at boot-sales. Most of my charts are small designs and some have been stitched quite  frequently when I was selling cards at the Framlingham Country Market.

This frog has been stitched at least once before, originally a kit from  Textile Heritage they don't list the numbers of the colours so I must have matched my DMC threads to the originals when it was stitched for the first time. 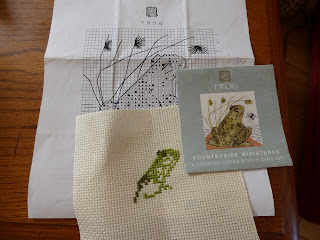 Several different greens in this but it won't take too long to do. I've been stitching for an hour or so in the morning, sitting by the front window where the sun has been streaming in........ better than housework!

Posted by Sue in Suffolk at 07:00
Email ThisBlogThis!Share to TwitterShare to FacebookShare to Pinterest
Labels: Cross Stitch