My small battery strimmer isn't man enough for some jobs so this year no one will cut down the stinging nettles, and I don't mind that at all as they provide vital food for some butterflies while they are in the  caterpillar stage. There aren't many nettles here really, just along the top of the ditch in a few places. But BiL would have zoomed through them with the big petrol strimmer - just like Colin would have done in the past. Neither of them would have taken a bit of notice of me saying "can you leave a few nettles"!

Lacking fresh veg I decided to pinch out a few nettle tops and use them in an omelette as a change from the wild garlic.   They were blanched by pouring boiling water over them twice - tested to check the  stinging-ness had gone then chopped up and added to two eggs. 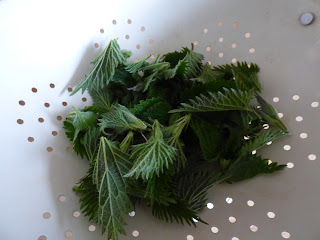 Turns out they are totally tasteless - but all that green-ness must be good for you.....right?
I investigated........ 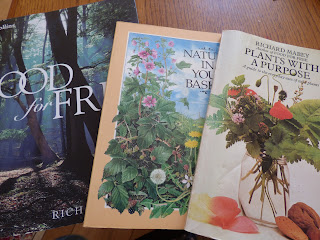 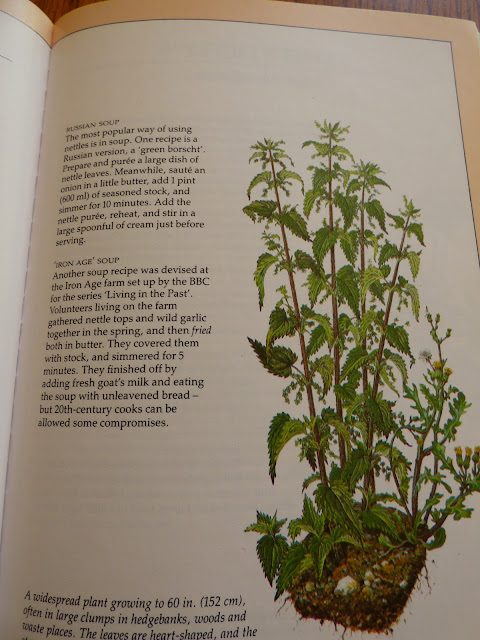 Urtica dioica
People and nettles are old companions. Wherever the soil has been enriched by the refuse of human settlement - there will be nettles. They have very high levels of Vitamin A and C, 2.3% by weight of iron and a remarkable 5.5% of protein.
Pick the young tops between March and June.
Mankind has been using nettles from Prehistoric times. During the WWII nettles were harvested to supply chlorophyll for medicines.

The page above mentions the soup made in a BBC TV series "Living in the Past" from many years ago when a group of families lived in a replica of an Iron Age Farm Settlement.
When I read this I had to go and look at my copy of the book which was an amazing find from somewhere ( I can usually remember where I found a treasure but this alludes me.) 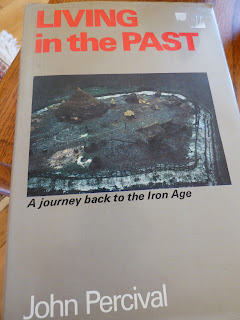 The series was made in the late 70's and through one of the wettest summers ever. The families spent a lot of the time wading through mud and never having enough to eat.


Meanwhile the weekend here was lovely, sunny but too windy for sitting out!

Back Tomorrow
Sue
Posted by Sue in Suffolk at 07:00
Email ThisBlogThis!Share to TwitterShare to FacebookShare to Pinterest
Labels: Natural world