Why on earth I should be feeling guilty about it - I've no idea. Guilt about book buying dates back years .....from the time my Mum would give me money for my birthday and say "for goodness sake don't spend it on books". But they bring me Great Happiness and anyway I'd saved £150 on heating oil!


This one had been on my wish list for ages - ever since I read about it on the WWII book list on Scott's blog - Furrowed Middlebrow.

Pamela Hansford-Johnson - Winter Quarters. Fiction from 1944.
Quite a rare book because it's never been reprinted since it was published in 1944 and  was once over £20 on amazon but a copy from the US had come down to £8. I was expecting it to take a month to arrive - but it got here in 2 weeks.  I found it fascinating because it  looked at a little bit of WWII that I'd not ever read about before.
Waiting to be posted abroad during WWII in 1942 an artillery battalion is stationed in a small English village. This book looks at the interaction of soldiers and civilians. Through the book we get to know some of the people who live in the village and the members of the battery from the Major and Captain to the junior offices. They have personal and psychological troubles, wives, girlfriends. The men spend a lot of time in the pubs and are bored and tense waiting for the off.
When I wrote this in my Book of Books Read I discovered that I'd read one of hers before, a long time ago.... "The Honours Board". I might have a look at some of this authors other titles.

This is the one I feel most guilty about as its a Brand New Hardback Fiction and I NEVER buy brand new hardback fiction but I'm miles down the library waiting list and this popped up on the amazon Used bit for £5.99 . I grabbed it because it was £5 cheaper than the rest - very strange.

I haven't read it yet but know it will be brilliant just like the first 3 in the series.


The book below kept appearing up on my "recommended for you list", it sounded intriguing and I knew who I could pass it on to after reading. 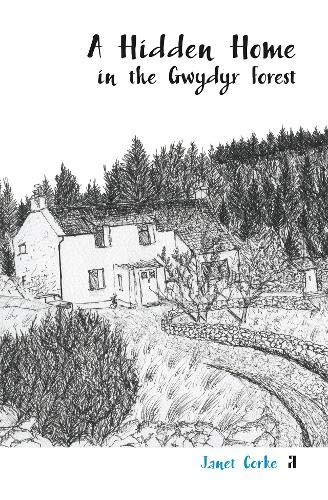 Janet Corke - A Hidden House in the Gwydyr Forest. Non Fiction. (Published 2019). In 1955 a young English civil engineer working on a new Hydro Electric facility, finds an empty cottage 1,000 feet above the Conwy Valley. There is no vehicular access and the only amenity is a nearby stream. Charlie Corke bought the cottage and gradually renovated it. When he married, his new wife struggled with the minimum facilities and soon a new baby moved in too. This story is told by his Welsh wife Janet who was training as a solicitor in Llanrwst when Charlie came into the office to purchase the house. At the end of the book the family move abroad for Charlie's work and never return to live in the cottage.
I enjoyed it and it's been passed on.


This week my flowers on the table are Cornflower - self seeded in the cutting garden from ones first sown in the spring of 2018. Beautifully Blue. 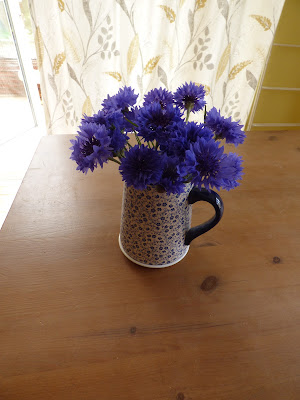 Posted by Sue in Suffolk at 07:00
Email ThisBlogThis!Share to TwitterShare to FacebookShare to Pinterest
Labels: Flowers on the Table, My Books