Did We Find Treasure?

Archaeologist son thought he would bring his metal detector and swish it over the meadow before I moved away, don't know why we'd not thought of doing it before, but he had been looking at "finds" maps of the fields around about and discovered that a few treasures had been found not far away.

So we all dressed up in our warm clothes (the forecast for a mild weekend forgot about Saturday's chilly wind blowing across the Suffolk fields) and stood around while he waved the detector backwards and forwards waiting for bleeps.

The first bleep found a ring-pull, next bleeps found a teeny piece of lead and an equally tiny bit of copper.

Then a lump of old iron. By which time I'd decided that I would never have the patience to be a metal detectorist!

Wiggly worms were found, I held one on my hand and Youngest Granddaughter asked "does it tickle?" But when I put the wiggly worm on her hand so she could see how tickley it was - she soon shrieked. Youngest Grandson was watching all this well wrapped in his pushchair.

More bleeps and  a large "find" was a Stanley knife, clogged with mud and lost by someone years ago and then finally, before we gave up and went in for a warming cuppa he found a couple of points from archery arrows.....not ever so old but a little bit interesting. 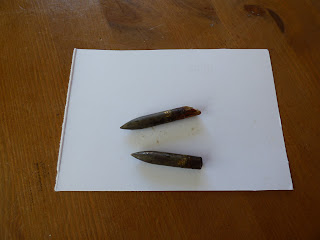 Who had used the meadow for archery? we wondered...... maybe the son of the previous owner.

One thing I learned about digging for treasure is how cruel it is for earthworms. I'm sure a few were inadvertently chopped in half!

Posted by Sue in Suffolk at 07:00
Email ThisBlogThis!Share to TwitterShare to FacebookShare to Pinterest
Labels: The Meadow