A Breath of Fresh Air

The Museum of East Anglian Life in Stowmarket has opened it's grounds for "exercise". Each day between noon and 2pm anyone can go and wander round and say hello to the ducks, turkeys, donkeys, Suffolk Punch horse, large black pig and the sheep.

DiL asked if I'd like to join her and the two youngest Grandchildren for an hours walk. It was about 10 degrees warmer in town than at home......... I must live in one of the breeziest places in Mid Suffolk.

Youngest Grandson was most excited by the ducks as his first word is "Duck", we're not sure why! 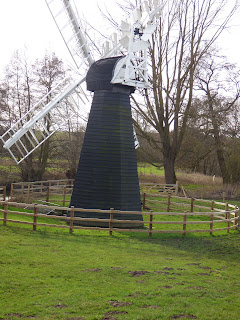 The museum has several buildings that have been moved there from elsewhere in Suffolk including this windmill which is a water pump.

A really bad photo of the donkeys on the hill. 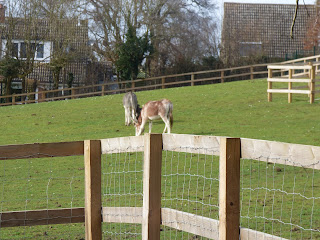 And my Bubble grandchildren. Youngest Granddaughter decided she didn't want her photo taken and hid behind the pushchair. She was in a bit of a grump after the turkey gobbled loudly and made her jump. 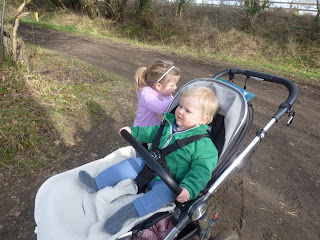 We had an hour in the sunshine, a change of scenery and it blew away the cobwebs. I think the grandchildren will want to go back with daddy at the weekend.

(And just in case anyone says we were going against the rules of lock-down, DiL was also picking up books from the library and I popped into Asda for the things I forgot in the Co-op!, so "yah boo sucks to you!!" and I've just looked this up and wiki says it's a "childish expression of derision or scorn!)

Posted by Sue in Suffolk at 07:00
Email ThisBlogThis!Share to TwitterShare to FacebookShare to Pinterest
Labels: Grandchildren