I woke up early  Saturday morning - stuck out a hand and switched on the radio to hear the lovely news that GB&NI had won their 7th Gold medal, this time in the Mixed Triathlon. Then had to wait until 3.30pm until they eventually showed the race again.
Did you see Novak Djokovic's behaviour when he lost the bronze tennis match? It certainly explains why I'm not keen on him. First he hurled his racket up into the stands - luckily no one got hit and then smashed another racket against the net post......really childish.
Woke up Sunday to hear about more medals overnight in the BMX Freestyle and a record 4th medal for Duncan Scott in the pool. Later in the morning we had the amazing Max Whitlock in the Individual Pommel Horse final. He went first and had a perfect routine then had to watch the next 7 men competing. His high score was unbeaten so another gold - retaining his title from 5 years ago, our countries best ever gymnast with a total of 6 Olympic medals.
Outside in Track and Field GB don't have as many good athletes as we once did and Dina Asher-Smith had to pull out of the 100m due to injury. I loved watching the Men's High Jump when there was a shared Gold medal for Italy and Qatar.
I think GB&NI ended Sunday with a total of 32 medals and in 6th place on the medal table. A long way behind China and USA but not so bad for a small country.
Missed quite a lot of Monday morning Olympic TV due to dentist appointment but on the way home I heard there had been a Gold in the Three Day Equestrian Event. Home in time to see the individual competition where the top riders from the team event do another round of jumping and there was a silver medal. That brought the total to 34 and the 35th medal - another silver - came in the one of the women's weightlifting weight groups - a GB first ever.

Next.............catching up on the weekend away from the TV...........Headed out to the Saturday Needham Market car boot sale which I used to call the BIG boot sale but this year it's never been big and is as small or even smaller than the Small boot sale! There wasn't much to find. No clay flower pots but I found two clay saucers to put under the pots I already had and an interesting Christmas book - which may well feature in 'Photos in Advent 2021 posts'............that's what you call Being Prepared! 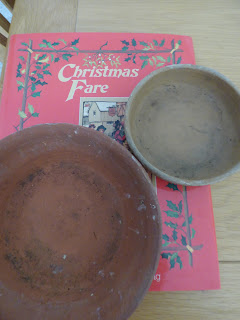 Later Saturday morning Son, DiL and the two Youngest Grandchildren came over plus BiL, and the 2 men got the thing hammered into the ground to hold my whirly washing line - seems bigger than I thought it would be, I really need to get my head around centimetres!  I treated us all to fish and chips (very handy living close to the chip shop) Youngest Grandson has finally got around to walking, he has  so many words but was a bit slow crawling and walking - it's so interesting how children change and the different ages they do things.

Sunday morning at the other boot sale and that was strange too because there were several 'booters' selling but hardly anyone buying  - really quiet and odd. All I bought were a couple of birthday cards for 50p each with Grandson and an age - which will go away for when Eldest Grandson is 8 and then 10 (also being prepared!) These are quite expensive in the shops where it's easy to find either Grandson OR an age but not both.

Monday was dentist - 4th out of 5 appointments.........thank goodness I'm nearly at the end.......for now! The washing dried well on the new whirly washing line. I've got it positioned so I can hang the washing while standing on the patio - so no more wet feet.
And today is Tuesday and I need to start by apologising for hardly leaving comments anywhere....again and for not replying to comments here.
Back Tomorrow
Sue
Posted by Sue in Suffolk at 06:00
Email ThisBlogThis!Share to TwitterShare to FacebookShare to Pinterest
Labels: Car Boot Bargains, Grandchildren, Summer of Sport 2021