When I collected my books from the library van a few weeks ago, two were by authors I'd not
come across and both already have written more in each series, and both were good reads - I Love it when that happens!

This is the first in a series of 4 so far. Modern crime set in and around Whitstable in Kent. The main character - Pearl is a single mother of a teenage son and was a police officer before having her son. She now runs a successful seafood restaurant and is also trying to start a private detective agency. Her slightly hippy mother Dolly features and it looks like there will be lots of foodie stuff and info about that area.
Summary from the library website.............
Pearl Nolan always wanted to be a detective but life, and a teenage pregnancy, got in the way and instead she built up a successful seafood restaurant in her coastal home town of Whitstable - famous for its native oysters. Now, at 39, and with son Charlie away at university, Pearl finds herself suffering from empty nest syndrome - until she discovers the drowned body of local oyster fisherman Vinnie Rowe, weighted down with an anchor chain, on the eve of Whitstable's annual oyster festival. Pearl seizes the opportunity to prove her detection skills and discover the truth but she soon comes into conflict with Canterbury city police detective, Chief Inspector Mike McGuire. Then another body is discovered - and Pearl finds herself trawling the past for clues, triggering memories of another emotional summer more than 20 years ago


Another  author I'd not come across before and again a good read. This is historical crime set in the1780s about  Dr Silkstone, a pioneering forensic detective. The first of six so far.
From the library website....................
The death of Sir Edward Crick has unleashed a torrent of gossip through the seedy taverns and elegant ballrooms of Oxfordshire. No one mourns the dissolute young man except his sister, the beautiful Lady Lydia Farrell. When her husband comes under suspicion of murder, she seeks expert help from Dr Thomas Silkstone.

I've ordered the next in the series from the library straight away.


Thank you all for comments about the mini pond. Col's sister said she's got some oxygenating plants in her pond and will give us some next time we are there. Round my sink pond at the smallholding (see below) I had a fantastic collection of stones picked up from all parts of the country over 20+ years of holidays 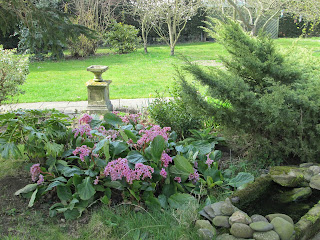 I would have loved to have taken the sink and stones from the smallholding to Ipswich but was banned from even thinking about it!  and anyway the sink was solid stone and weighed a ton! I doubt I'll get the chance to collect interesting pebbles again so will be stuck with Suffolk's flints around the mini pond.

Back in a trice
Sue