Home again for more work in the back bedroom.
A handy find left behind in the garage by Mrs F- a tin of radiator paint, but I had to buy wood stain for the window sills. Both jobs done. I managed to roll the old carpet halfway across the room to sand down half the skirting board but that was as much as I could do without help to shift the carpet.

The weather turned nasty wet and windy  in the afternoon so Sunday evening I lit the woodburner. 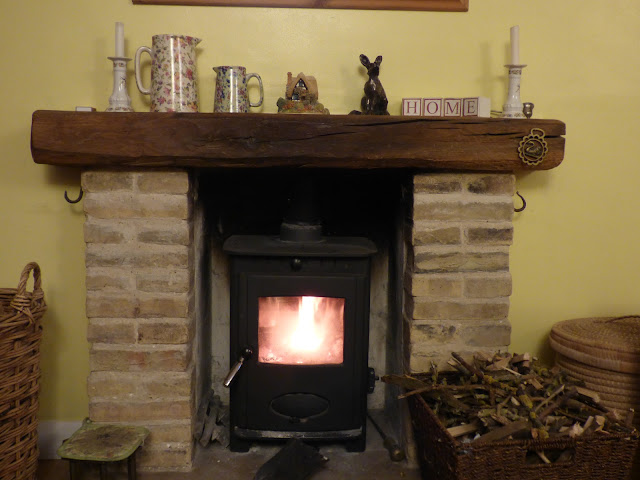 The room was soon toasty warm and with just a few sticks and half a dozen logs I was warm all evening. 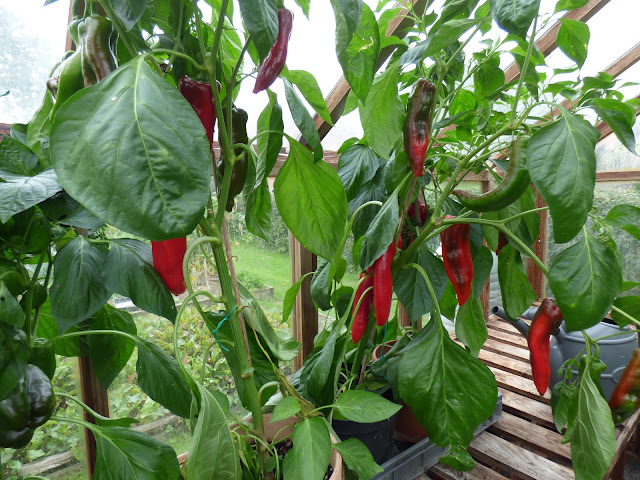 In the freezer!
Not pickled but frozen


Some of these red sweet peppers that were in the greenhouse on Sunday are now in the freezer. It's been a fantastic year for them. I have enough to make my Red Hot Relish and for many stir-fries all through the winter and spring.
A few more skinned  plum tomatoes have also been added to the bag in the freezer. I need to collect 4lb, but they are ripening slowly so only just over 2lb so far.

Col's brother came round to give me a hand with a couple of jobs that I couldn't do on my own, he took the doors off the upstairs shower room and airing cupboard ready for the new flooring to be laid. It's got to have hardboard and vinyl so will be a bit higher. He'll come back later in the week and cut a wee bit off the bottoms of the doors and put them back on. He also cut the skirting board to fit in the corner where the shower was. I'm going to try sticking it to the wall with gorilla glue.........another bodge that will be hidden behind the wardrobes!

Another job I did over the weekend was to have a move round in the craft room which got rid of the small drawers that I was using to store paper. I made a decision about the amount of stuff I have compared with the card making I actually do and having a clear out is another job to add to the winter job list...........after I've made up cards using the 3D decoupage sheets I already have.

Not quite so chilly on Monday evening as it was on Sunday thank goodness.

Thank you everyone for comments over Bank Holiday weekend............
Elaine - I thought of you when I bought the book - thinking you probably had copies of the original recipes among your old books!
Joy - not sure I will be trying any recipes - they are a bit odd
Sadie - Lovely to see you back blogging. Blogger was playing silly Bs and wouldn't let me see pictures or a space to comment! I shall try again.
Amy - and I thought our odd bits of skirting board with random joins and unfixed was odd!
Suzanne - hope you've had a good summer
Eileen - I'm getting much better at not buying too many second hand books - but I will be going to two big second hand book sales later in the autumn!

Posted by Sue in Suffolk at 06:00
Email ThisBlogThis!Share to TwitterShare to FacebookShare to Pinterest
Labels: House and Home, Local Events