My runner bean wigwam has collapsed. It leaned a bit and I tried to push the canes back in the ground but no good, next windy spell and over it went, pulling out several of the plants but as there were virtually no beans it doesn't really matter. Masses of leaves but the flowers didn't set. I think I had 4 meals from them (plus the ones that won me a first prize at the produce show!). Must get the canes further in the ground next year.

Had to do the first lot of grass cutting for months, two compost bins are full now and closed off until next year and I need to empty one small one from last year to spread on the cut flower bed ready for planting out the Alstromeria plants.I have to decide what to put in the two quarters that had annuals in this year. I'm thinking gladioli and hollyhocks.
I've edged round the oval 'rose' bed, it has other things in it too and  the cyclamen are all out, purple and white.......very pretty, never had them anywhere I've lived before.

I got the bedroom ceiling  painted and they take the big ugly shower cubical out next week. Had a  brainwave and change of plans the other week. I decided NOT to put a small bath in the bedroom when the  shower cubical comes out. It wasn't something I really wanted to do but a four bedroom house with just a shower didn't seem feasible when it comes to selling. So new plan...........put a small bath in the downstairs loo/utility where the washing machine is. The small basin with cupboard beneath will be changed for a pedestal and that will make enough width to fit a 700mm bath - which is the narrowest there is. No need to tell people moving in that it's actually too cold to bathe in there despite the radiator! I don't know why I didn't think of it before.
The washing machine will go in the porch-way bit beside the little freezer. I'll have to find somewhere for the cupboard that currently stands there. It's where I store jars of jam/chutney etc but I'm not making anymore jam or chutney (apart from the Red Hot Relish) this year, so if I give lots of last years away I should be able to empty the cupboard.
Must get on with painting the bedroom walls once the shower is out as a new carpet has been ordered and date fixed for laying it.

The village with Big WI has a crafting group. Just one morning a month but I thought I'd go and have a look as I've not done any cross stitch for months (get sidetracked by the lap top when I sit down here) and I thought  a morning out to do crafts would actually get some done. Some of the ladies who go to this are WI members and several others go too, all older than me, but they sit and craft and natter. So I can sit and craft and listen to the gossip...........mostly about people I don't know - luckily! Coffee and biscuits included in the £10 (half year fee) so not extravagant. 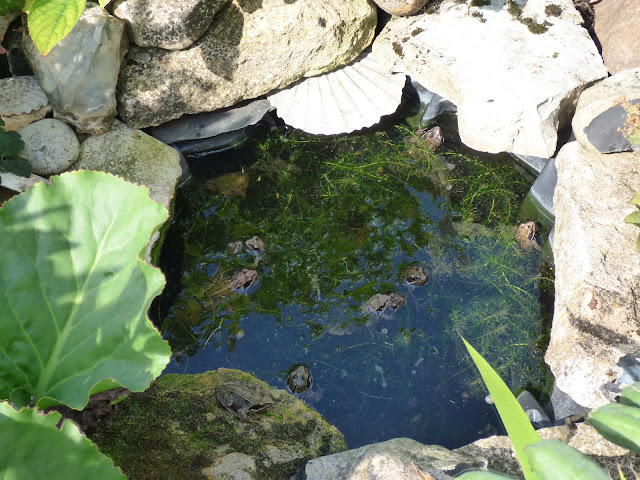 Had an idea for a quick meal for one. ...........soften a thinly sliced courgette and half an onion in a bowl in the microwave and meanwhile cook one portion of spaghetti. Drain the spag and tip into the hot courgette and onion mix. Stir in a spoonful of pesto and mix everything together and then grate a little strong cheese on top. Eat out of the bowl to save washing up! This is probably not a revolutionary idea but Colin didn't like pesto so it's not something I could have used for a meal before.

Thanks for comments yesterday.