Why on earth did I volunteer?

It's small WI's annual fundraiser, and I had volunteered so set the alarm for 5.30am and headed off 45 minutes later. The lady who keeps everything from one year to another and takes it all to Needham had already got most of the stuff out of a box trailer with help from her son when I arrived at 6.45am. She had been there since 6am
There were hundreds...........well, several dozens of car-boots there on Saturday but not as many people buying as I've seen sometimes. We had quite a lot of junk on the WI stall as it's been in and out of the trailer for many years but several of us had taken some new things and quite a lot was sold.

I got an email later to say £150 was raised, that will help with funds. I forgot to say that when we went to see Mamma Mia a couple of weeks ago the committee decided to pay for it out of funds because we all went (12 of us) so the £150 will cover that with some left over for speakers. WI membership is £41 a year but that is divided between National, Local Federation and only part actually goes to each WI. So with a small WI there isn't enough to pay for speakers for every month without additional fundraising.

There were enough of us helping so that we could go off for a wander and I came back with...........
2 new Pritt sticks, a new pack of crayons, a new  UNO card game, a board game of  We're Going on a Bear Hunt and the lantern, which I thought I'd hang outside until it dawned on me that it has holes in the top so will fill up with water and go rusty. So maybe it will hang in the conservatory instead. 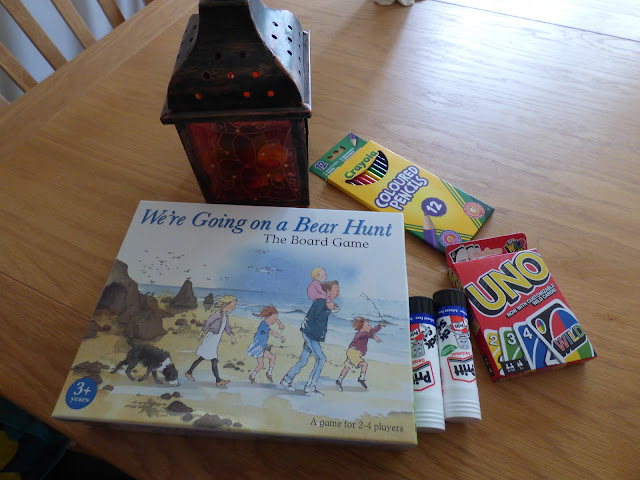 Me being me ( Tight or sensible!) took a flask and a snack, so that I didn't need to spend out on drinks etc. My spend for the morning was £4.50 for all the above. Got home just after midday but it felt like mid afternoon!

Thank you for all the lovely comments on Saturday.

Back Tomorrow
Sue
Posted by Sue in Suffolk at 06:00
Email ThisBlogThis!Share to TwitterShare to FacebookShare to Pinterest
Labels: Local Events, WI